These pillowy soft and luscious homemade cinnamon rolls topped with a perfect cream cheese glaze are the ultimate morning treat and so easy to make! They're big, fluffy, gooey and you can make them as overnight rolls! 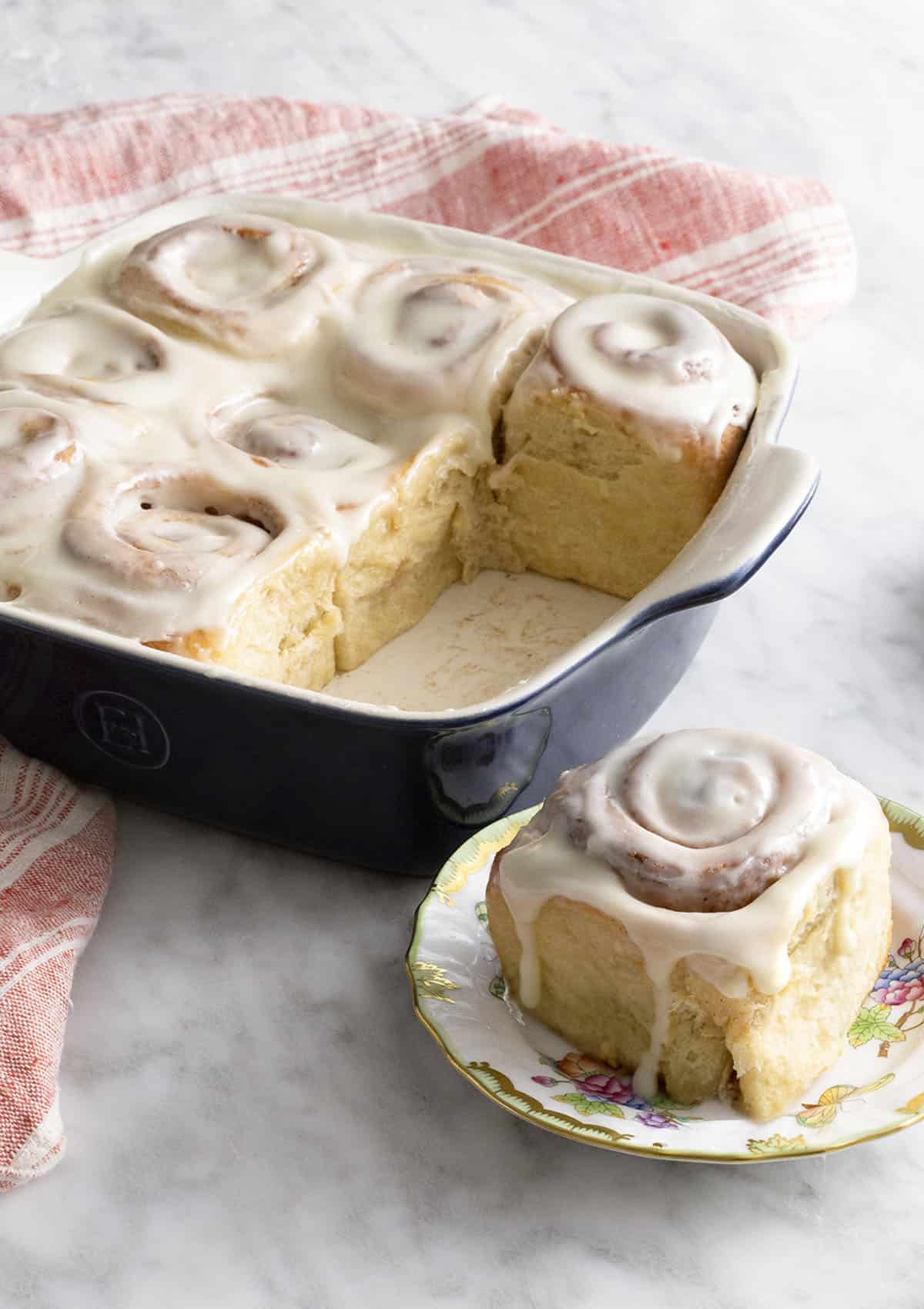 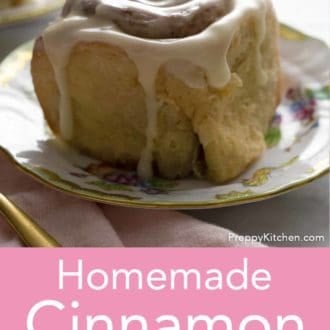 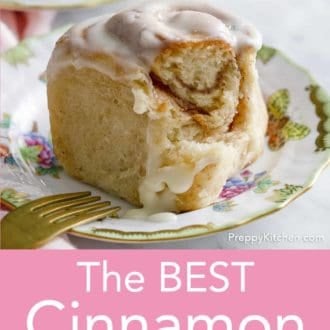 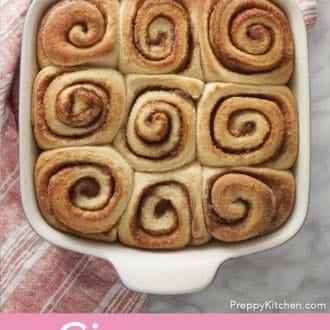 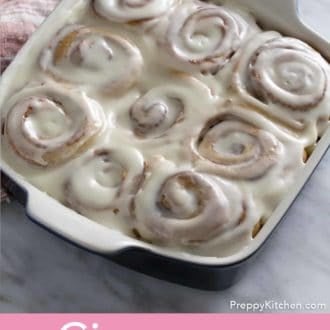 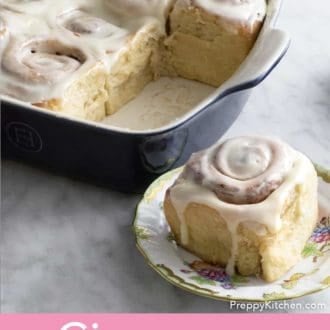 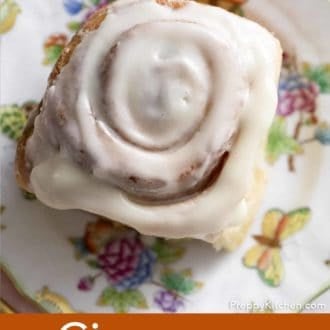 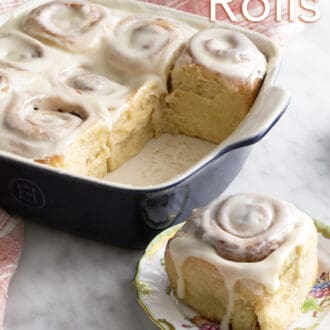 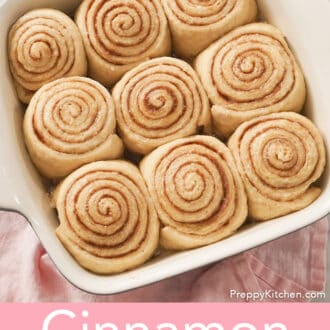 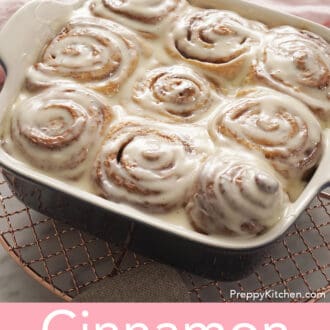 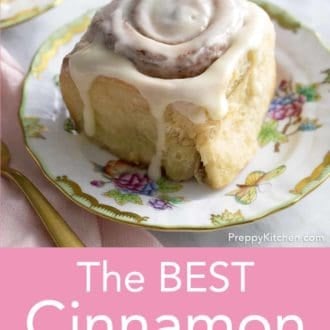 If you haven’t had homemade cinnamon rolls yet then you’re missing out on one of life’s little pleasures that can transform a bleh morning into a delicious start to the day. So fragrant and not at all dry or crumby like those preservative-filled pre-made “treats”. 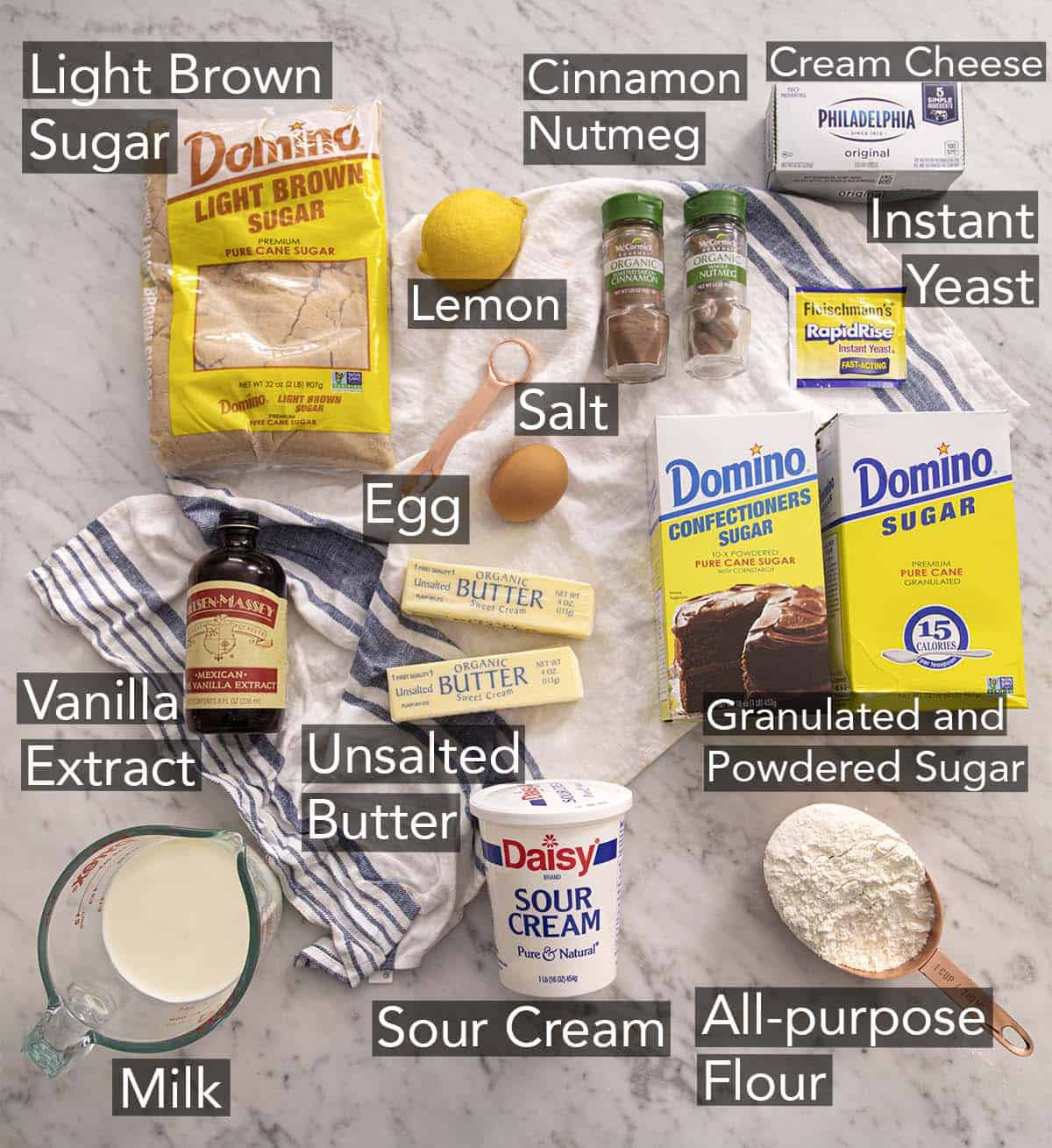 Instant Yeast: This fast-acting yeast goes directly into the dry ingredients. If you need to use active dry yeast then mix it into warm (110F) milk along with two teaspoons of sugar.

Unsalted Butter: If you’d like to use salted butter then reduce the added salt in the recipe by a pinch.

Sour Cream: If you can’t get ahold of sour cream then sub in plain yogurt.

All Purpose Flour: I used AP not bread flour.

How to Make Cinnamon Rolls 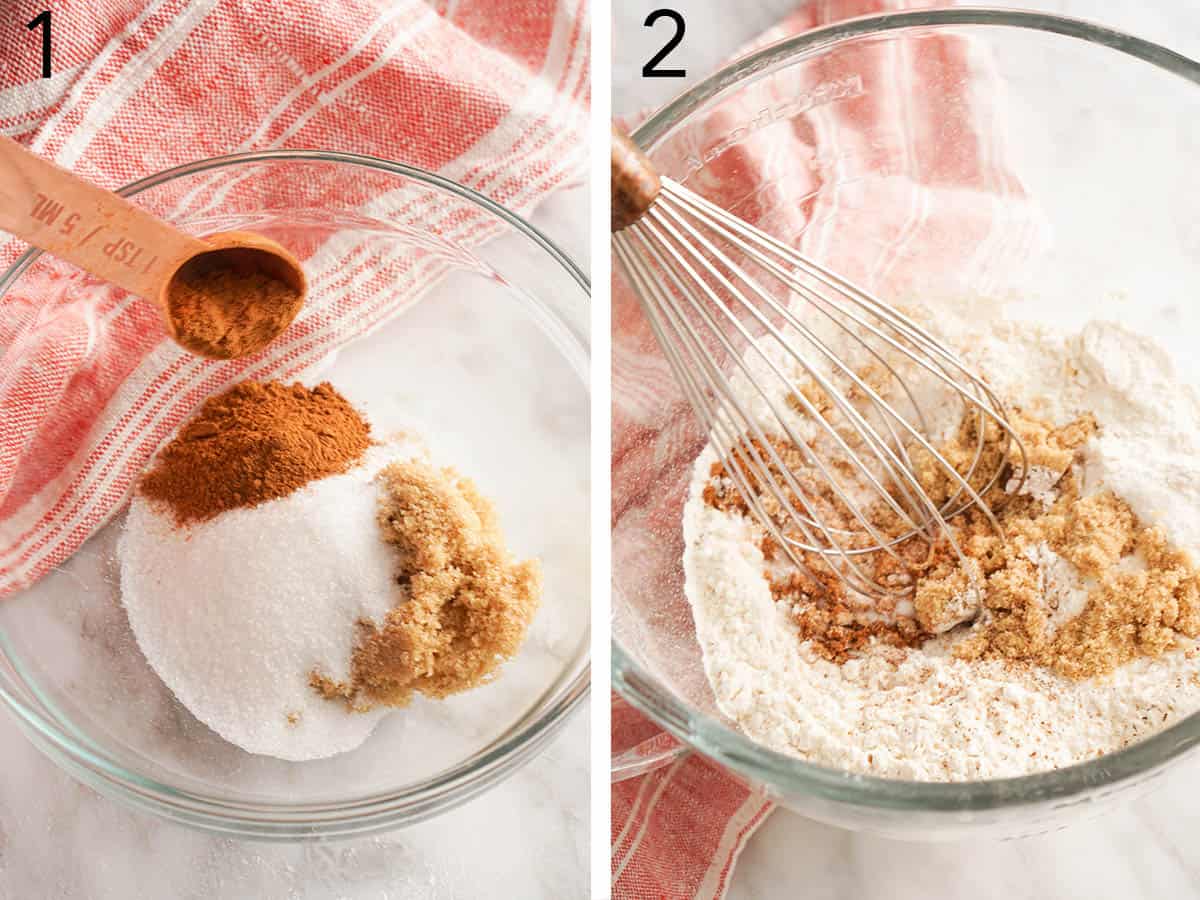 1. To make the cinnamon sugar add the white and brown sugars as well as the cinnamon to a small bowl then whisk together and set aside.

2. Add the flour, instant yeast, sugars, cinnamon, nutmeg, and salt to the bowl of your mixer and whisk together until combined. 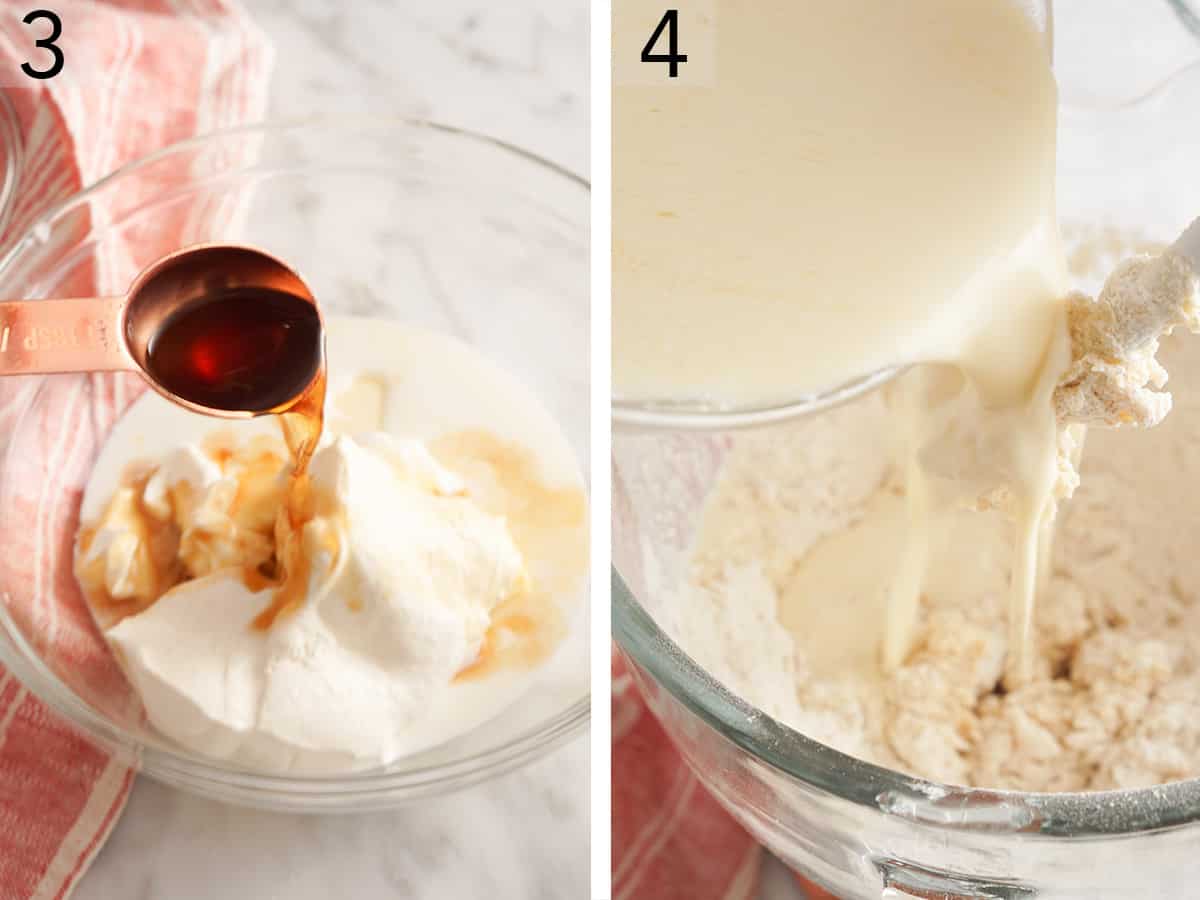 3. In a medium bowl add the butter, milk, sour cream, and vanilla extract then heat until butter is melted and mixture is warmed through (about 110F). I use 20-30 second bursts in the microwave at 70% power but you can easily heat on the stovetop too.

4. Pour the warm liquid mixture into the dry and run the mixer fitted with a dough hook on medium low. 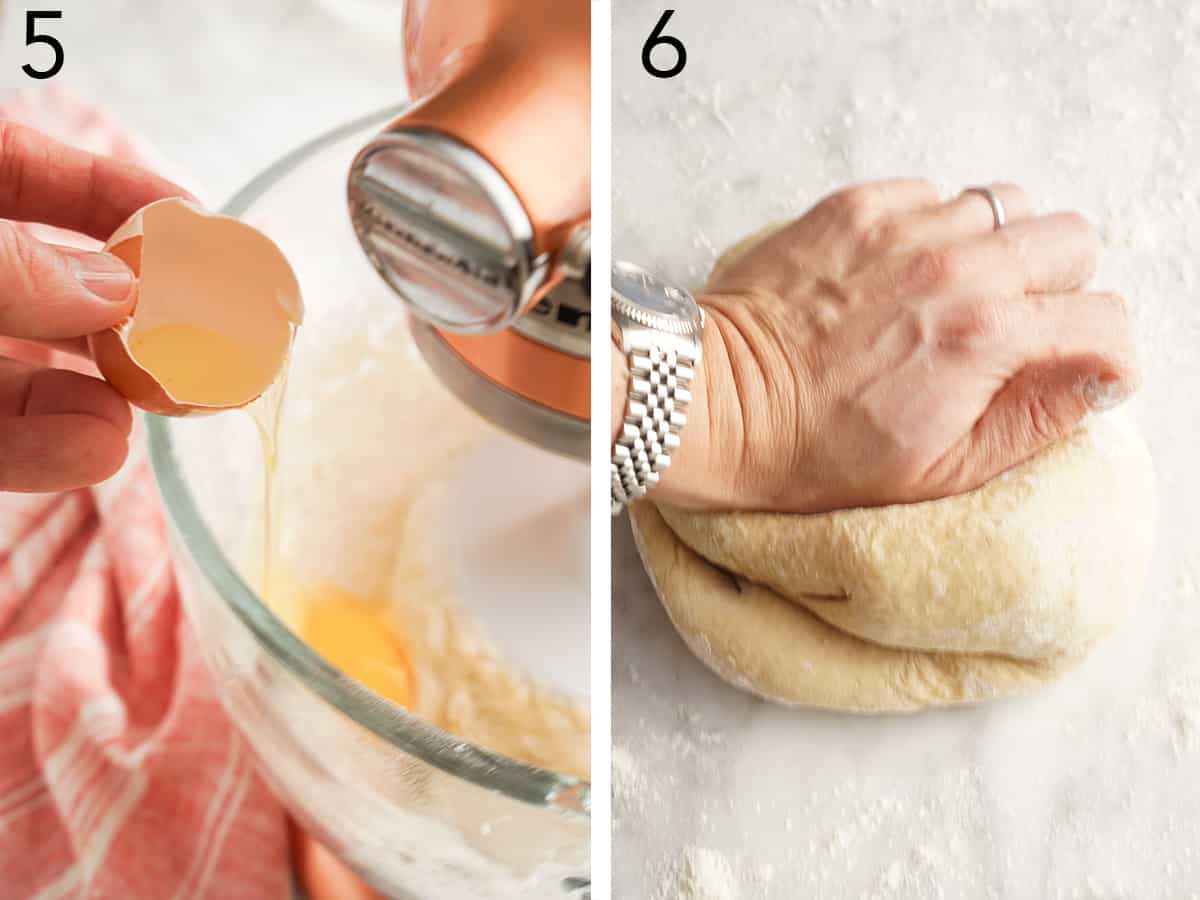 5. Add the egg while the mixer is running. Run the mixer until the soft dough starts coming together.

6. Transfer the dough to a clean, floured surface and knead until smooth, about 4-5 minutes. The dough will go from being shaggy to smooth and will hold it’s shape much better by the time you’re finished. The dough will be a bit tacky but not sticky. 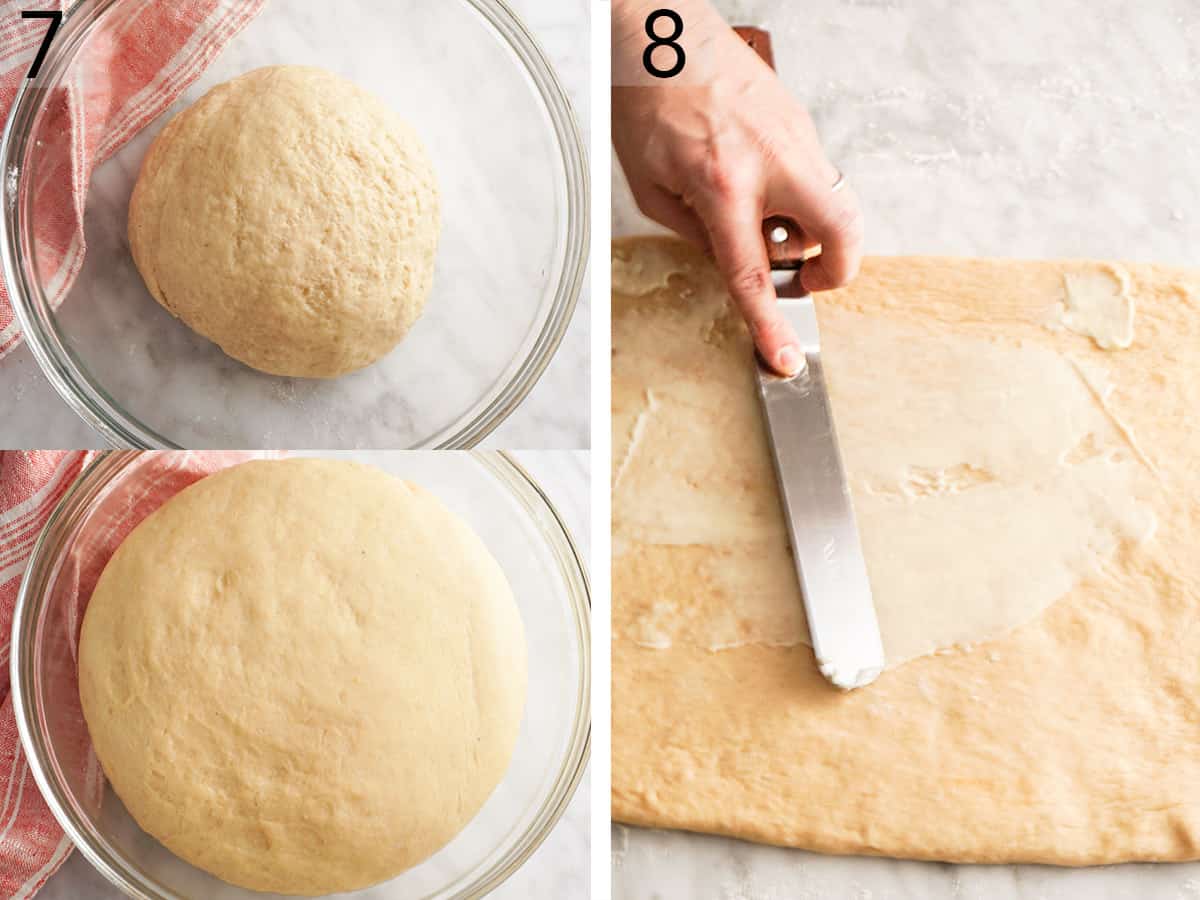 7. Place dough in a large oiled bowl and cover. I like to heat my oven to 110F then turn it off and let that be my warm and cozy place for the dough. In the photo above you can see the dough doubled in size and is ready to roll.

8. Transfer the dough to a clean, floured surface and roll into a rectangle about a quarter of an inch thick. Move the dough as you go and add flour as needed to the work surface and your rolling pin. Spread the room temperature butter on the dough then sprinkle liberally with cinnamon sugar, leaving the unbuttered strip plain. 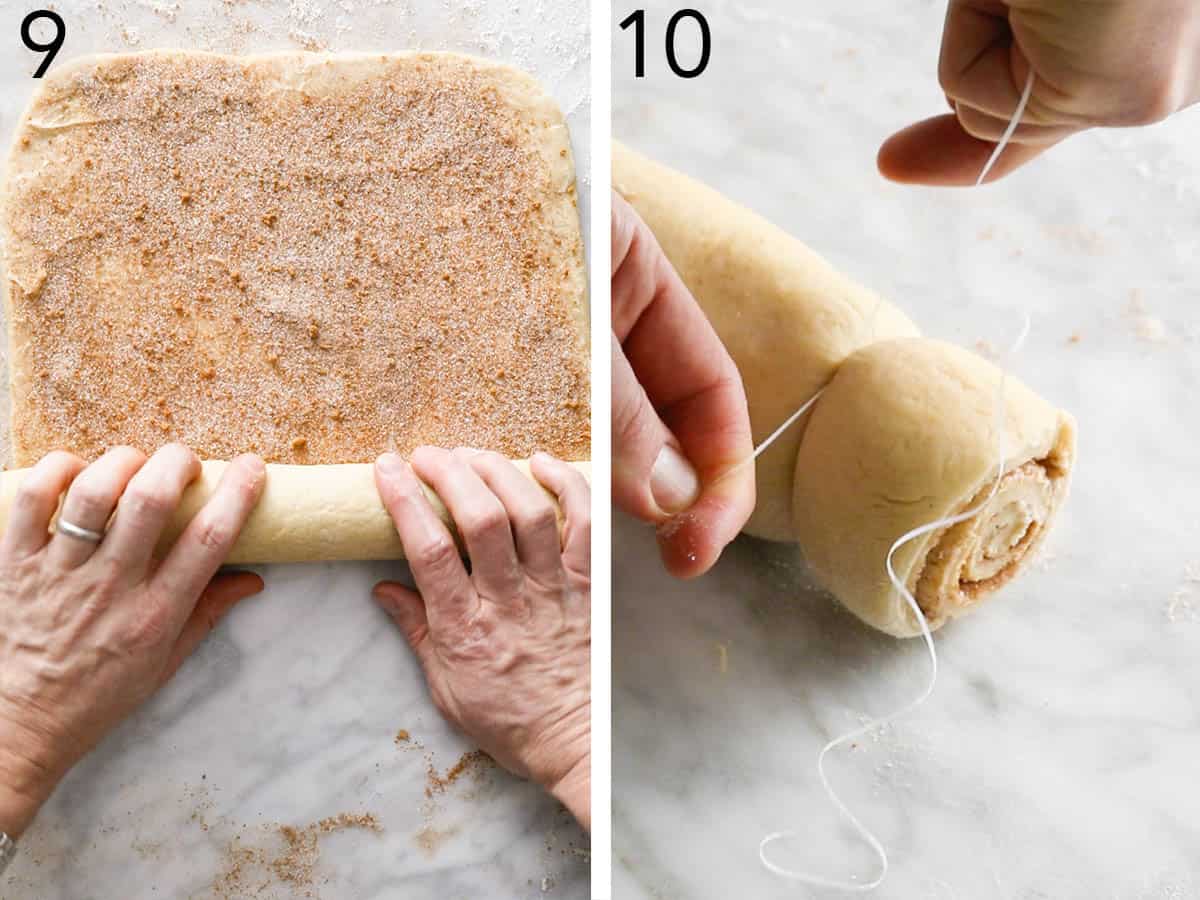 11. Roll the dough tightly so the unbuttered part is at the end. I have some cinnamon sugar to brush off the edge as you can see in the photo. You can roll it up from the short or long side, the former gives you more pieces the latter will have more of a spiral.

12. Cut the rolls into similarly sized pieces. You an go thicker (about an inch and a half) or thinner (closed to an inch). Place in a baking dish so they are not touching and have some room to puff up, then cover and place in a warm place to rise, about 40 minutes. Once risen the rolls will be baked at 350F for about 28 minutes or until golden brown. If the rolls are getting brown on top at the 20 minute mark cover loosely with foil. If you want to make these as overnight rolls just cover with plastic after assembling in the baking dish and refrigerate, then place in a warm spot to rise and then bake. 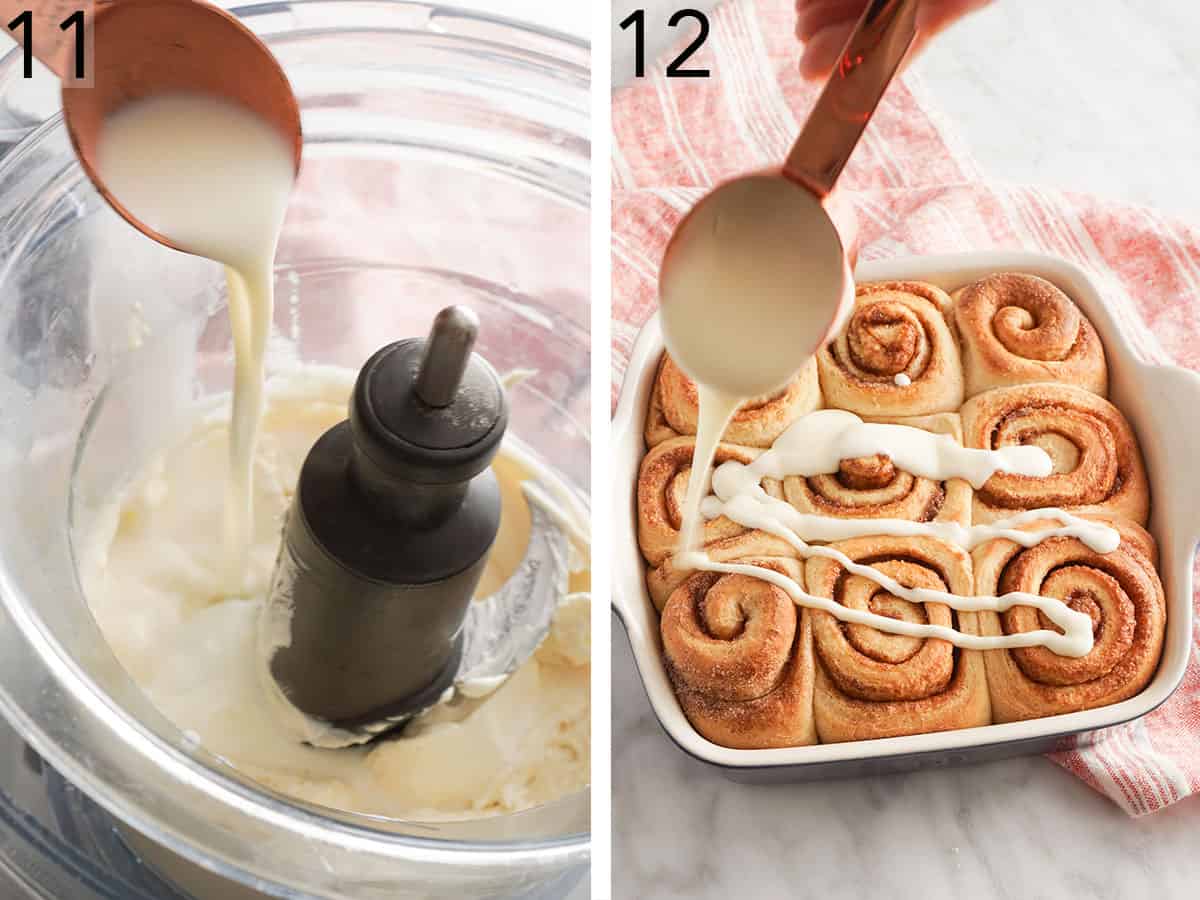 13. Make the cream cheese frosting while the rolls are rising or baking so it’s ready as soon as they come out of the oven. I used a small food processor to make it but you can use a hand or stand mixer. Add the room temperature cream cheese, butter, and salt to a bowl and then beat until smooth. Pour in the milk, vanilla, and lemon juice then mix again until incorporated and then finally beat in the sugar.

14. As soon as the rolls are out of the oven add about half of the cream cheese icing to the rolls and spread to cover completely. Once cool, you can add the remaining glaze onto them while they’re in the baking dish or onto individual rolls as they’re plated. 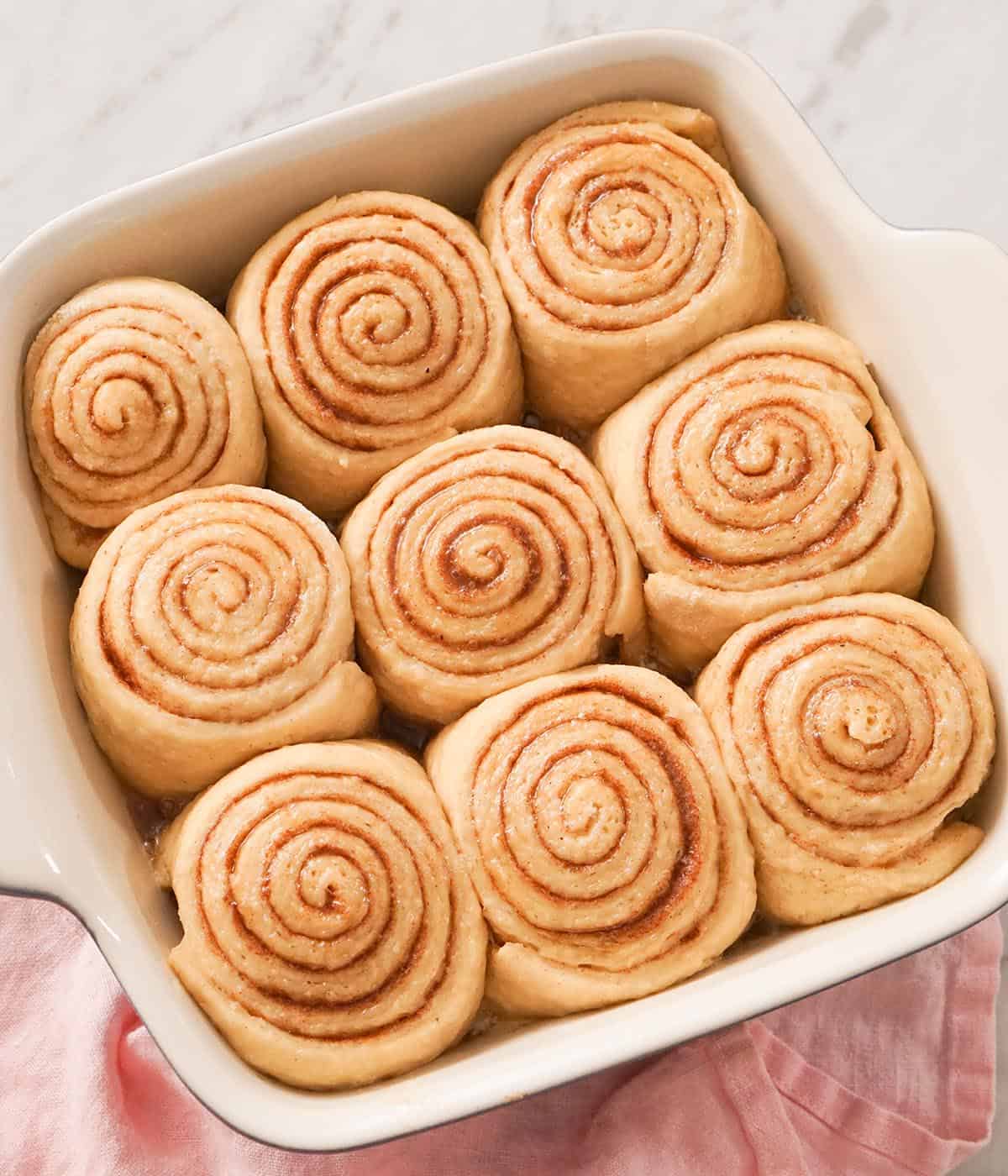 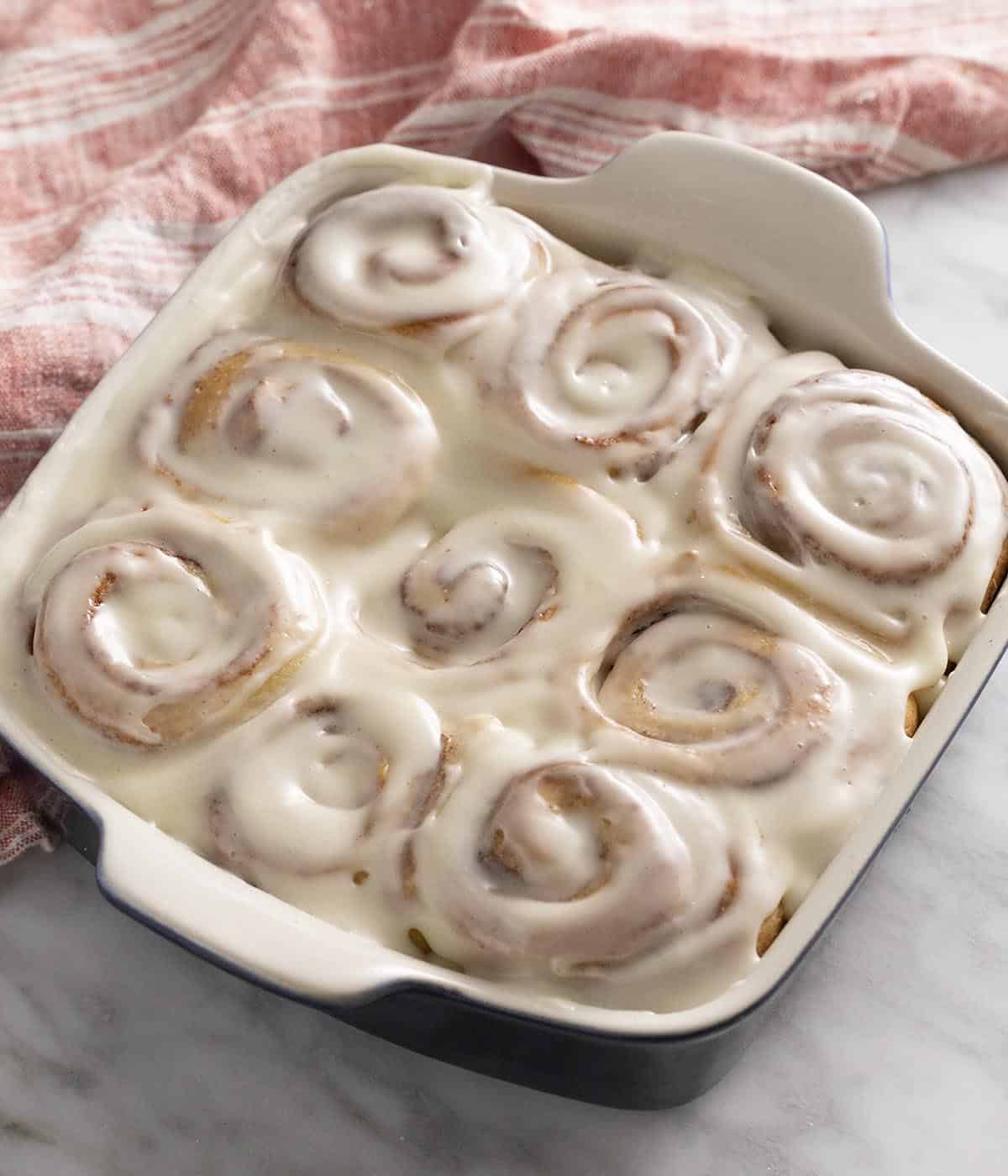 Can I freeze them?

Yes! You have several freezing options for this cinnamon rolls recipe: Freeze them after they’ve been baked and frosted, after baking but before frosting, or unbaked in the pan before rising. If you’re freezing before baking then allow them to thaw and rise. If after baking, thaw then warm in the oven. In all cases you should wrap your cinnamon rolls very well with plastic and foil.

What’s the difference between Active and Instant Yeast?

Active yeast has larger granules of yeast, which need to be dissolved in water before using while instant yeast has a smaller granules that can be mixed directly into the dry ingredients.

What can you add to cinnamon rolls besides a cream cheese glaze?

What’s the best place for the dough to rise?

Your cinnamon rolls will want a nice warm place to rise so the easiest thing to do, especially on a cold day, is to warm your oven to a low temperature. I like to heat my oven to 120F then lower to 100F and let the rolls rise there.

Should they be touching when baking?

You should place your cinnamon rolls in a baking dish that’s large enough for them to expand during the second rise. If you crowd the rolls they will not have that light texture we all love.

How do you know when you’re done kneading?

The dough will go from rough to smooth and it will hold it’s shape more. Knead the dough until  its tacky to the touch but will not stick to your fingers.

If you’ve tried this cinnamon roll recipe then don’t forget to leave a rating and let me know how you got on in the comments below, I love hearing from you! 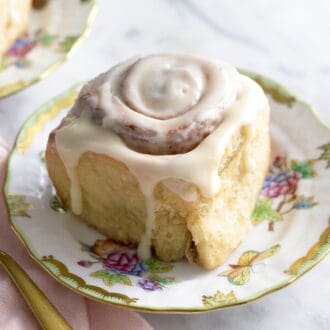 For the Cinnamon Sugar: