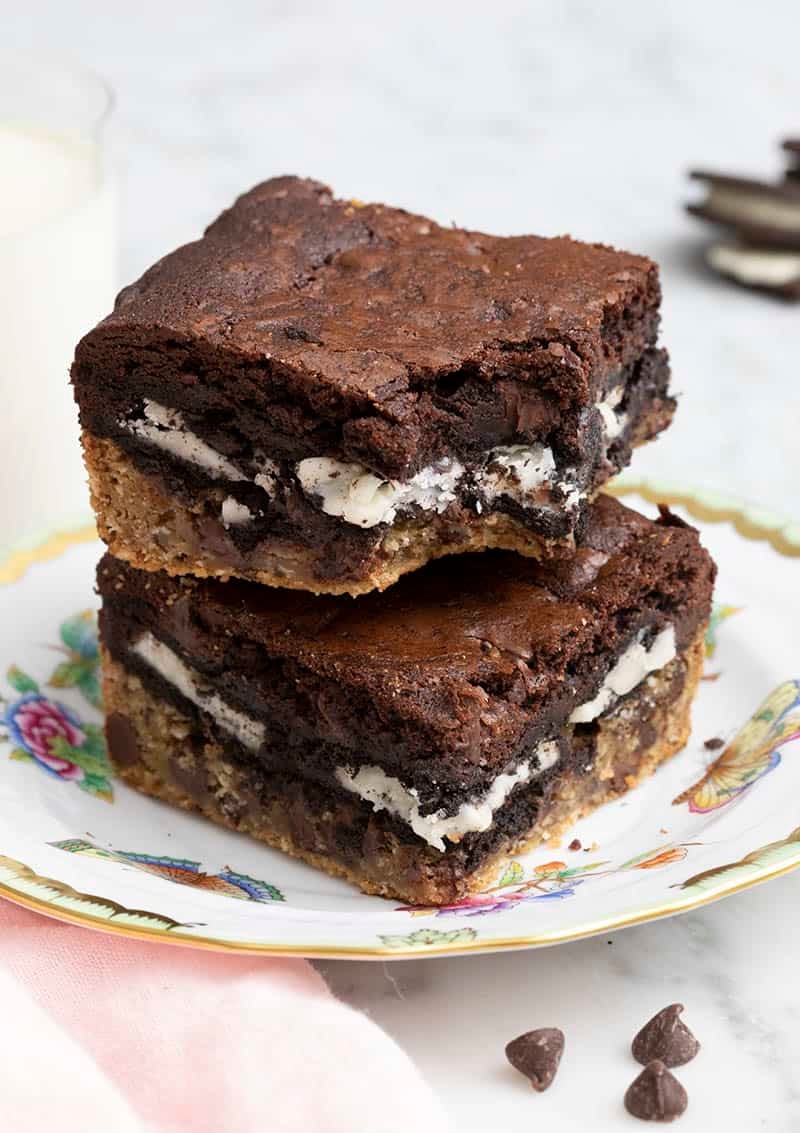 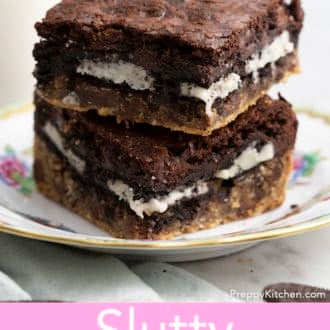 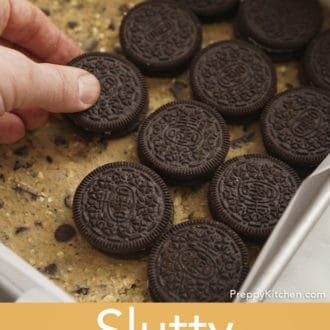 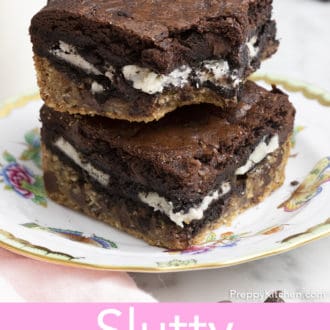 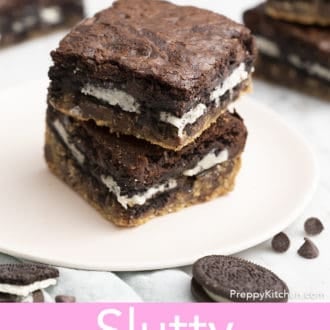 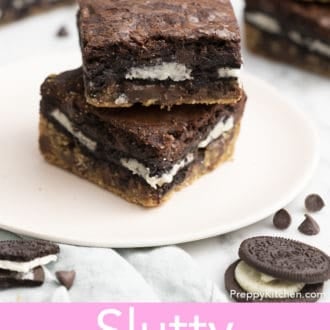 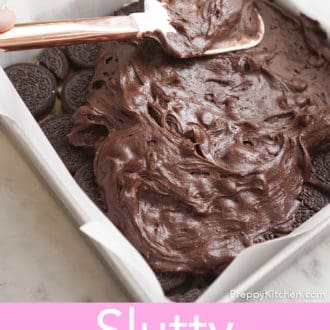 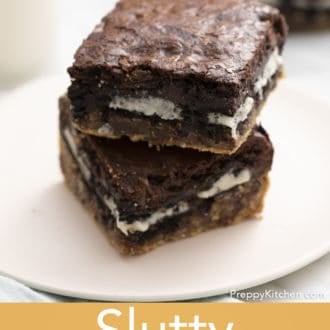 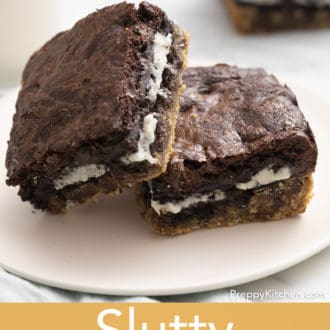 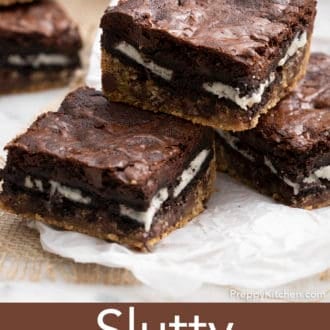 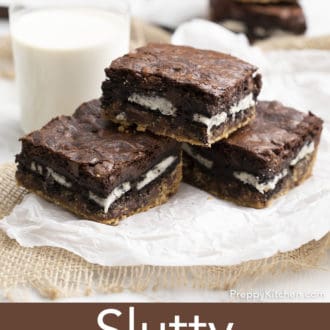 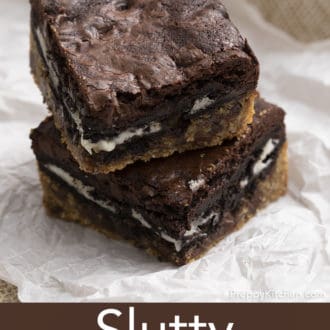 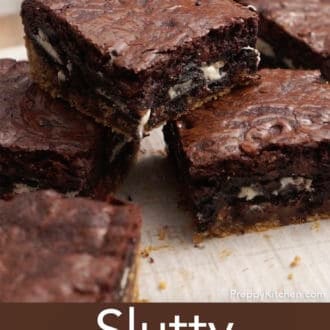 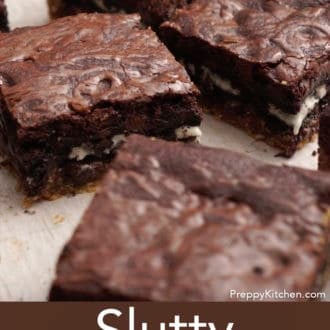 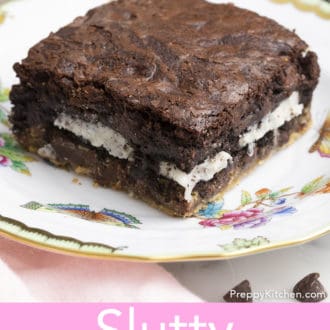 In my recipe, everything’s homemade (except the Oreos, because you have to draw the line somewhere), including a decadent dark chocolate brownie layer, and a scrumptious chocolate chip cookie layer, which makes enough dough to stash in the freezer for later so you can bake a batch of cookies whenever you have a craving. See my notes below for more tips and tricks. 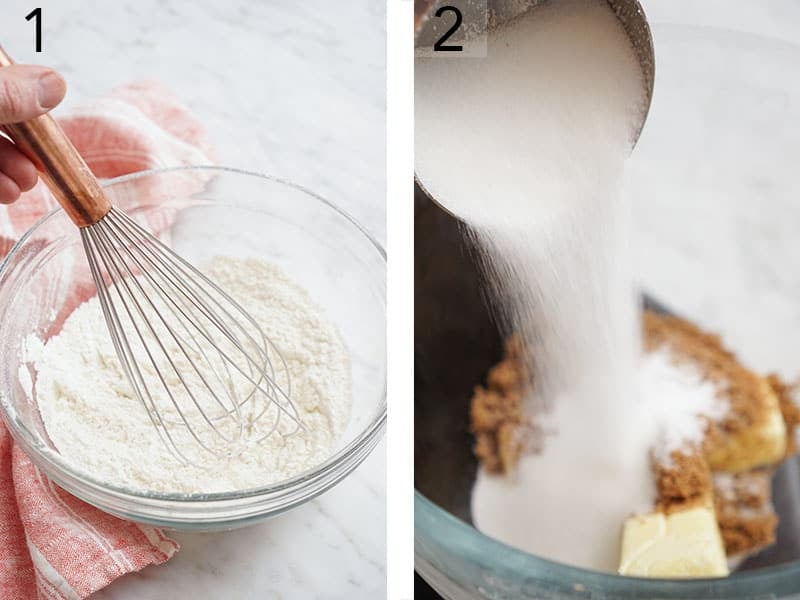 1. Add the flour, baking powder, baking soda and salt to a bowl and whisk to combine then set aside.

2. Cream the room temperature butter with the white and brown sugars. Beat until light and fluffy then scrape the bowl down and beat in the egg and vanilla. 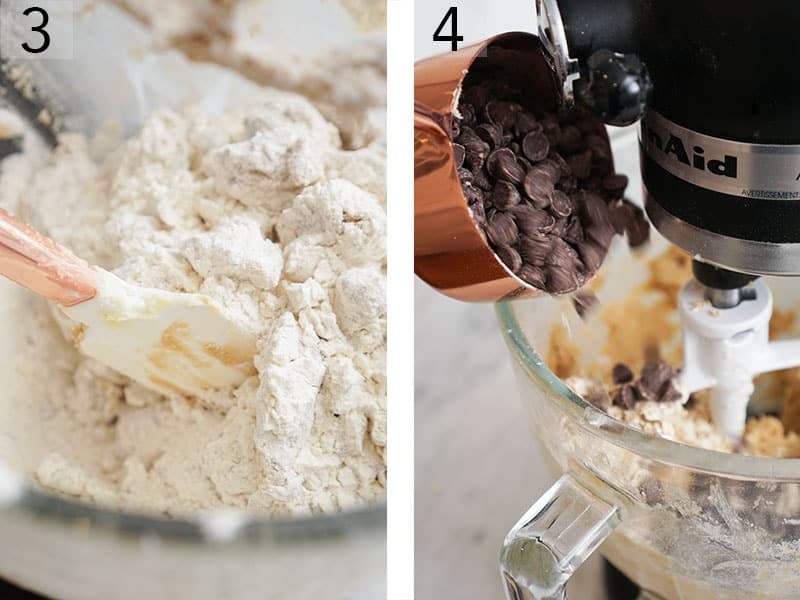 3. Add the flour mixture into the butter and give it a little mix with your spatula to get things started.  Then mix on low until almost combined. 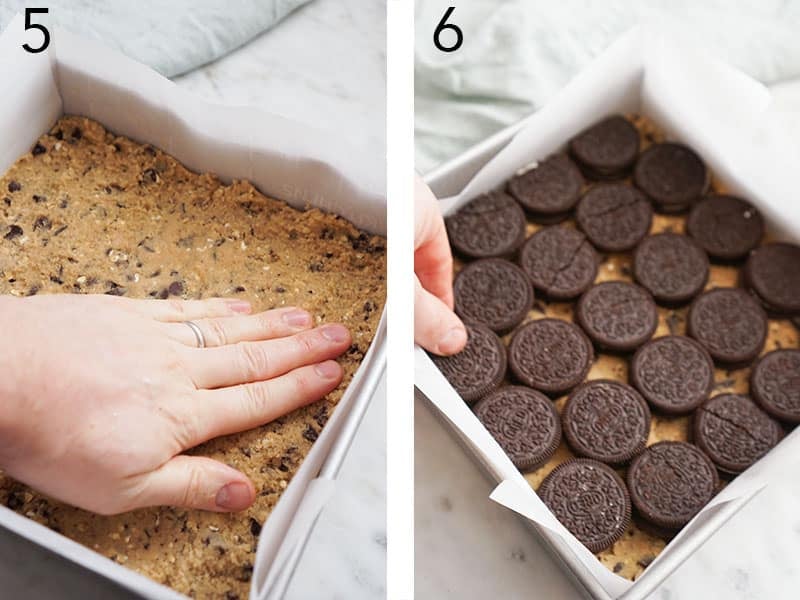 5. Line a 9×9 baking dish with parchment paper then transfer the cookie dough and spread it out. You may have a little bit left over to bake into a cookie or two, or you can use it all for a nice thick layer.

6. Add a layer of Oreo cookies onto the cookie dough. I like using double stuffed for this recipe as it gives you a nice layer of the creme right in the middle. 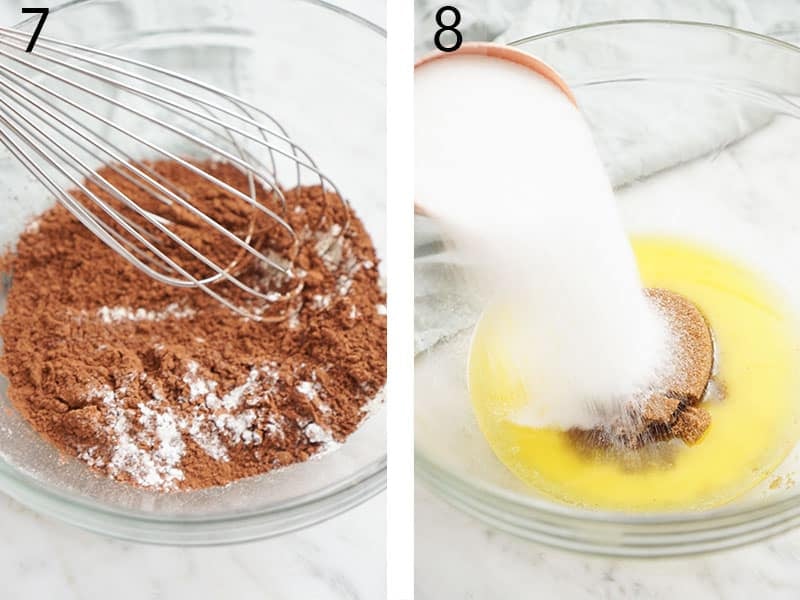 7. For the brownie layer you’ll want to mix the flour, cocoa powder, baking powder and espresso powder in a bowl then set aside.

8. Melt the butter in a large bowl then add the sugars, egg, and vanilla then mix very well. Beating the mixture at this point gives you a nice glossy crackled brownie top. 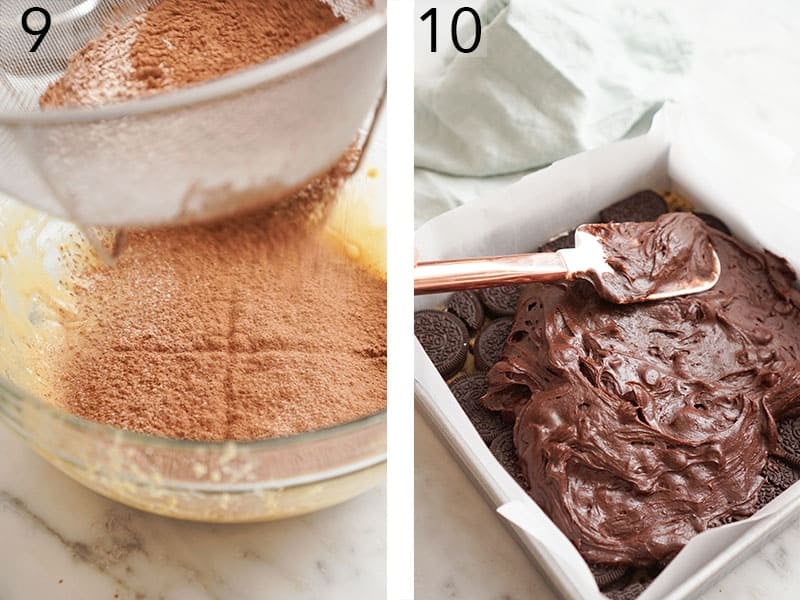 9. Sift in the dry mixture and mix until almost combined. Fold in the chocolate chips and you’re ready to assemble.

10. Carefully spread the brownie batter over your Oreo layer and smooth out to the corners. Pop Into the oven and bake at 350F for 35-40 minutes or until the center is set. 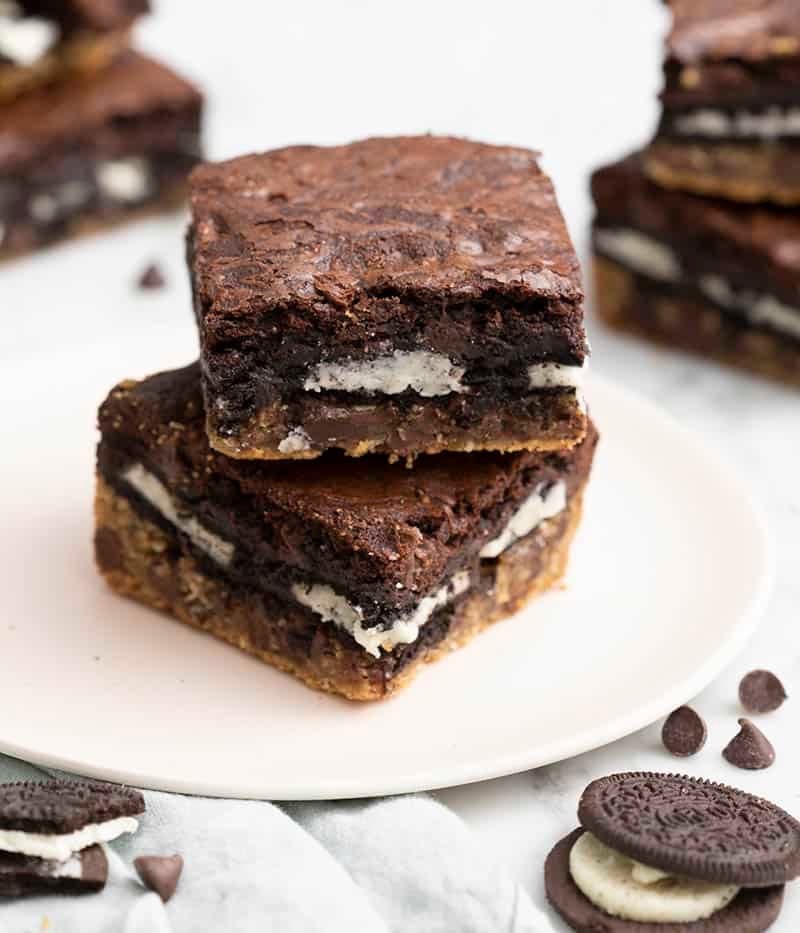 Pro Tips for this recipe 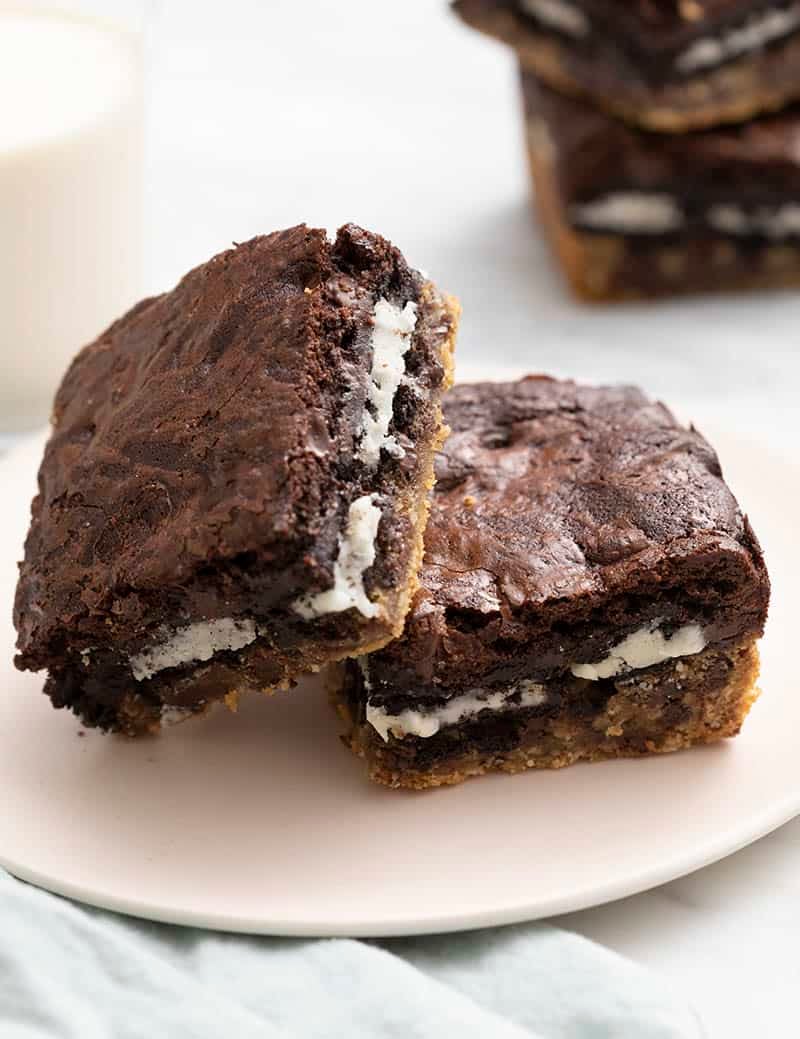 How did they get their name?

Does it matter which layer goes on top?

What’s the best cocoa powder to use?

I like to use a darker, Dutch processed cocoa powders as it yields a fudgier brownie but will often use a hybrid cocoa that’s part dutch processed and part natural. This recipe is really forgiving though so you shouldn’t worry about the cocoa powder too much, just use what you have on hand. 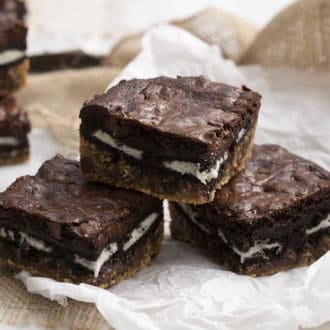 Don’t stress about making a solid layer with the Oreo cookies; you can fill in some gaps with caramel-filled chocolates or more broken Oreos, and the brownie batter will handle the rest.
-Use any blend of chocolate that you desire for the cookies and the brownies. I’m a big fan of dark chocolate, but feel free to sneak some milk chocolate in, if that floats your boat.
-It’s going to be very hard to resist eating these hot out of the pan, but they do slice best when allowed to cool for a couple of hours. I like to cut them into nine even squares, then cut the squares diagonally into triangles.