These rich chocolate cupcakes filled with an indulgent ganache and topped with Italian buttercream flavored with a raspberry reduction are just beyond delicious! 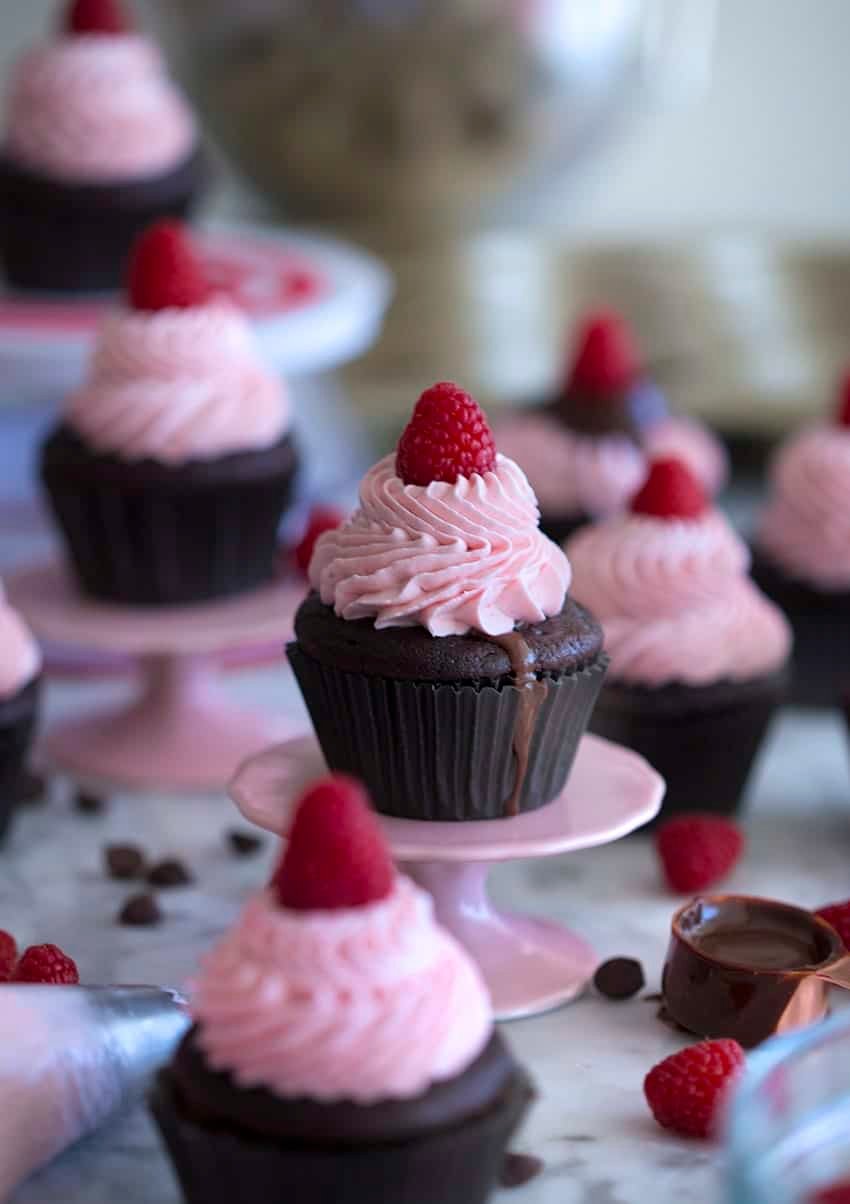 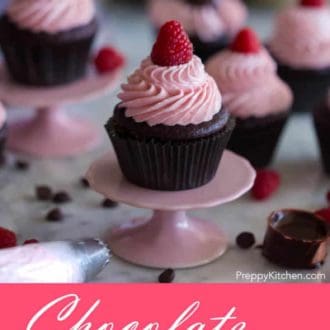 Craving an indulgent treat I decided to make a batch of my super-rich, chocolate cupcakes filled them with creamy, chocolate ganache. They’re topped with a very healthy dollop of Italian buttercream and flavored with a fresh raspberry reduction. What more could you want?

What is Italian Meringue Buttercream?

Italian buttercream is a creamy, dreamy intoxicating affair made by whipping egg whites, pouring in a hot sugar syrup and then adding in some butter. It’s much lighter than American buttercream and less sweet! 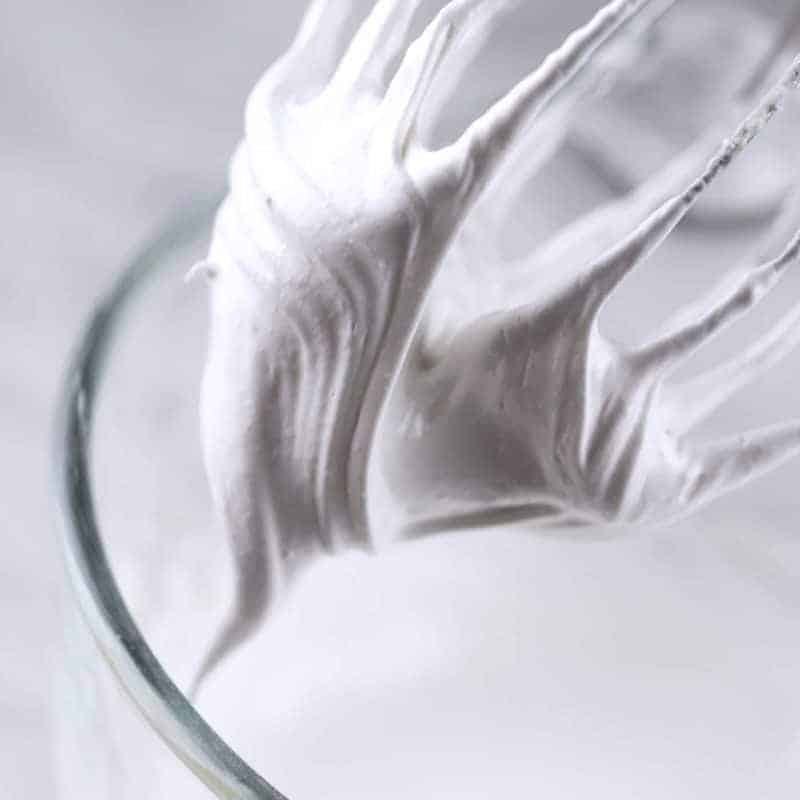 A Few Things to Keep in Mind

It’s important to use room temperature egg whites and butter. Monitor the temperature of your sugar syrup — add your pieces of butter slowly — and let your buttercream sit. You’ll need to give it a quick whip to bring it back to life. I know it’s a bit finicky BUT this buttercream adds a silky, not too sweet, touch to your cakes. It also pipes beautifully!

Common Problems: If your buttercream is “soupy,” just pop it into the fridge for a couple of minutes, then beat it. It should thicken up. I find consistency problems arise mostly from the meringue being too warm when the butter is added. Chilling it will help improve the consistency.

If you’re adding flavorings (i.e. chocolate, fruit, etc). to your Italian buttercream, I suggest doing this as the very last step.

Storage: This recipe will make a bit more buttercream than you need but it can be packed in a plastic bag and refrigerated for two weeks. Just If you’re not using your buttercream IMMEDIATELY — and it will be sitting for a few minutes — then just keep in mind that you will have to give it a short whip to “bring it back to life” as it loses its consistency quickly. If you want to make the buttercream ahead of time, it can be refrigerated for a few days. Once you’re ready to use it, allow it come to room temperature and give it a short “whip.” 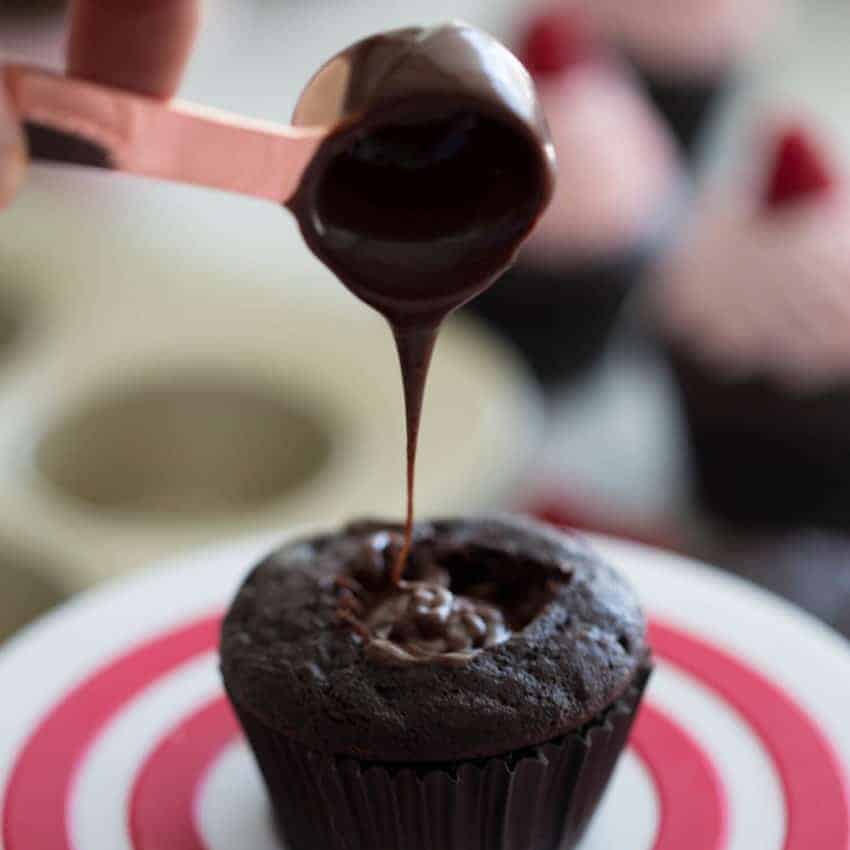 A tablespoon of ganache goes a LONG way. As an alternative you could also add some of the raspberry reduction or some home made vanilla pudding! And if the filling leaks out there’s nothing wrong with a drizzle of chocolate poking out to let people know there’s a molten center waiting to be eaten!

I love using a large open star 869 tip for this type of decorating. The jumbo-sized opening really lets you pump out a lot of buttercream! To get the look of this cupcake just twist the cupcake in one direction then another while you pipe.

Top with a raspberry and you’re done!

If you’ve tried these cupcakes then don’t forget to rate the recipe and let me know how you got on in the comments below, I love hearing from you! 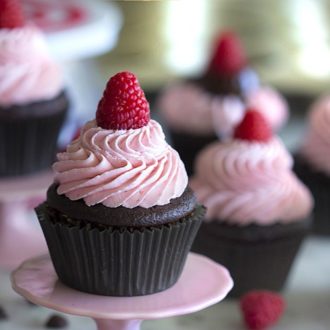 For the Chocolate Ganache

For the Raspberry Reduction