These witchy halloween cupcakes will knock your guests' socks off but they're delicious too! Spooky faces are piped with buttercream while the hats are made with a candy-filled ice cream cone chocolate sugar cookie for the brim and it all sits atop moist, fluffy, and richly spiced pumpkin cupcakes. 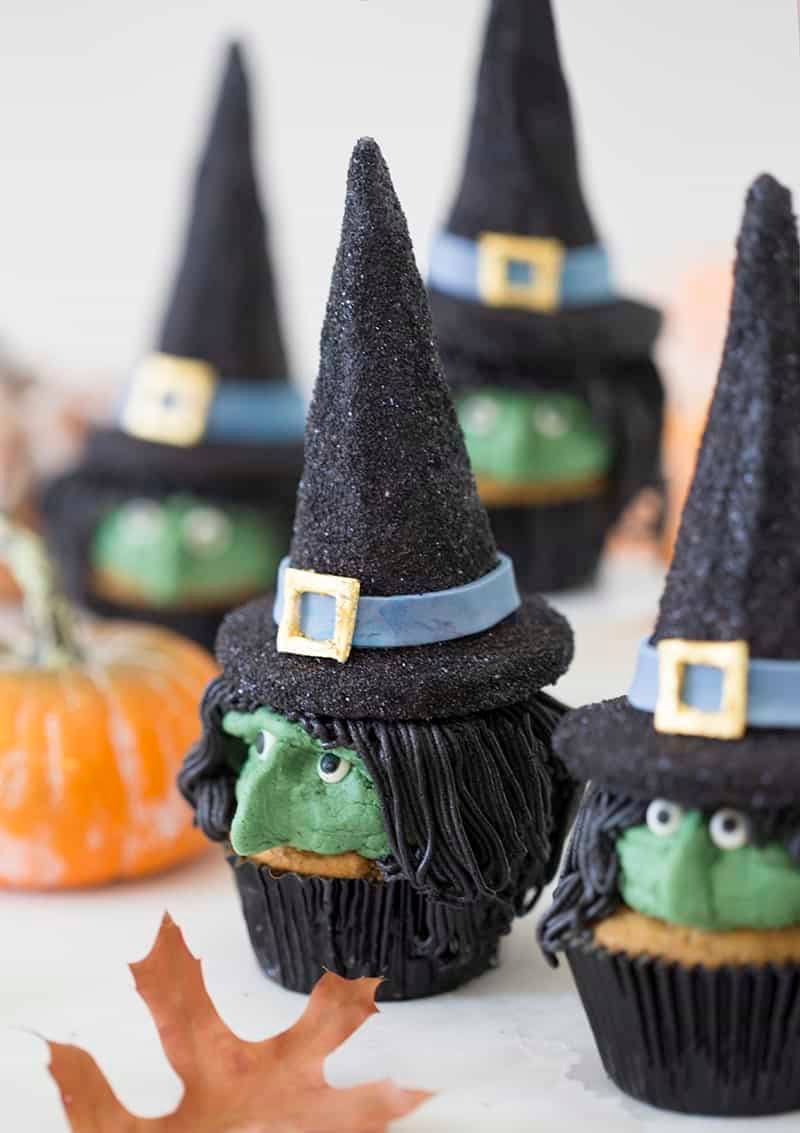 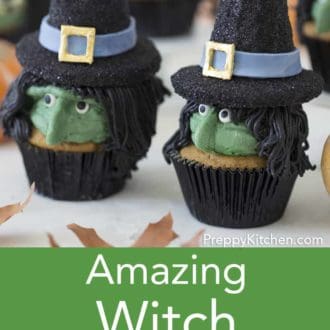 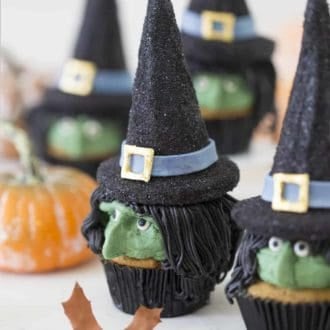 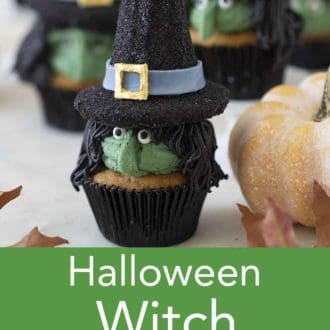 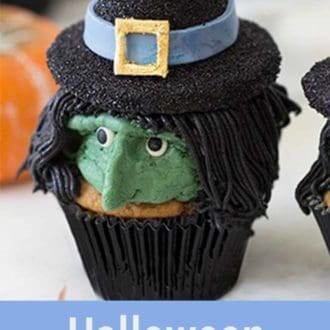 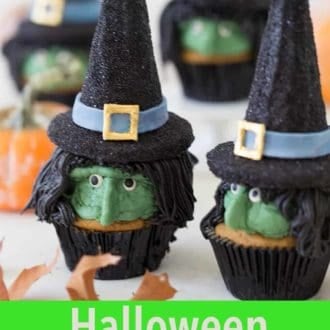 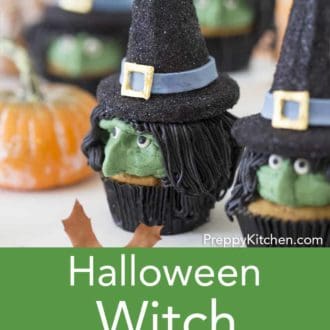 My witch cupcakes are made with buttercream faces and hair topped with a hat that might just look familiar to you if you’re a regular visitor to this blog. Last year I made witch hat cookies for halloween, which I LOVED! This year I wanted to use the same idea but take it further. I’m not going to lie, these little treats take a bit of time to make but I think it’s totally worth is and the whole project was pretty fun!

Pro Tips and Tricks for the best Witch Cupcakes

Large round tip for to pipe the head

Petal tip to pipe the nose

Grass tips to pipe the hair

My favorite set of round cookie cutters for the brim

How to make Witch hats for the cupcakes 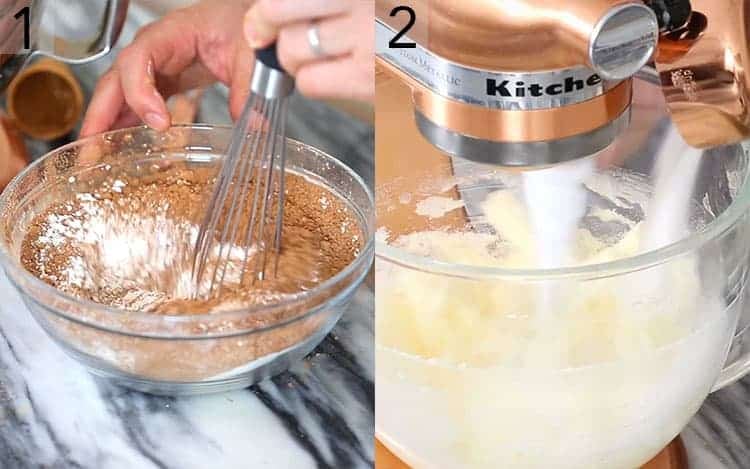 1. Preheat oven to 350 degrees. Sift together flour, cocoa and salt. Whisk to combine.

2. Combine butter and sugar in a bowl. Mix on medium-low speed with a paddle attachment. Mix until incorporated. Add eggs one at a time mixing until incorporated before adding the next. Don’t forget to scrape the bottom and side of the bowl. Mix in vanilla then add in flour mixture to the bowl. Mix at low speed for 30 seconds. The dough is ready when it sticks to the paddle mixture 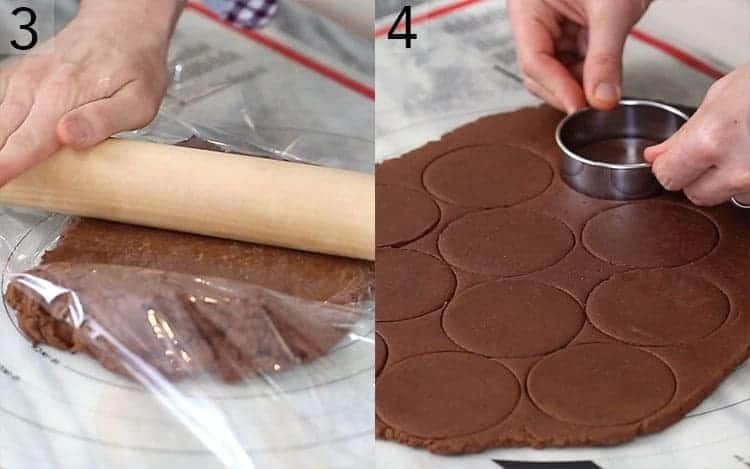 3. Roll out the dough between 2 pieces of parchment paper or plastic wrap. Refrigerate for about an hour.

4. Use a cookie cutter to cut out shapes. If you want super sharp edges then refrigerate pieces again for about 20 minutes but this is totally optional. Bake on parchment or silpat lined baking sheet for 8-12 minutes or until centers are set. Let cookies cool on baking sheet for about 10 minutes then transfer to wire rack to cool completely. 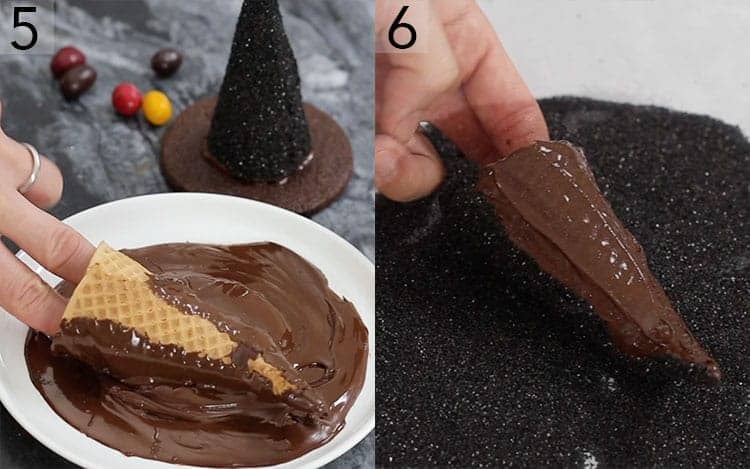 5. Roll ice cream cone in either melted chocolate or black candy melt. Use a knife or small spatula to wipe off the excess and cover any stray areas.

6. Immediately roll in black sanding sugar. Best to pop into freezer for a couple minutes to set before moving on. 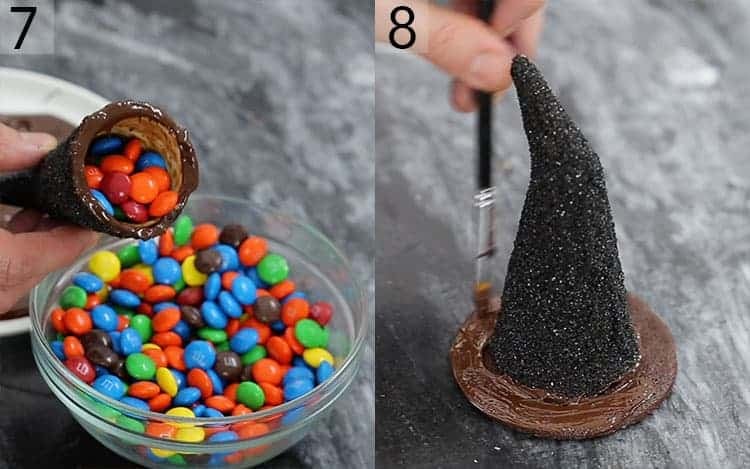 8. Attach cookie to cone then brush melted chocolate or candy melt onto the brim. 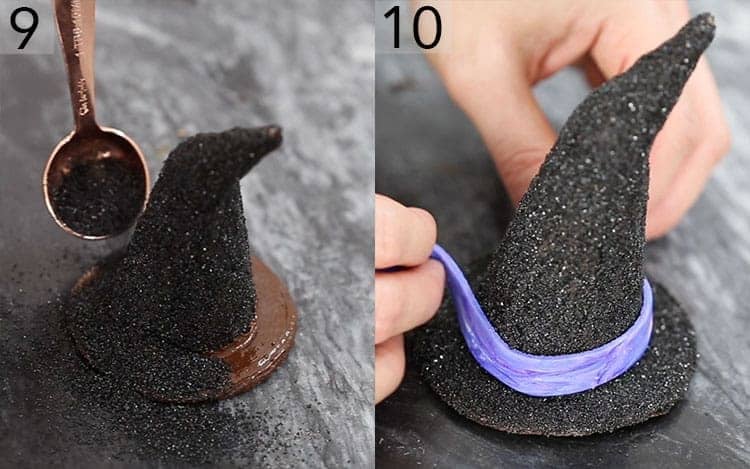 9. Sprinkle sanding sugar onto the brim.

10. Add red and blue food coloring to fondant (mixing more will give an even color. Mixing less will give a tie dye look) Roll out and cut bands for the hat. Cut out a buckle shape. You can either color the fondant yellow before rolling or you can use gold leaf or gold luster powder to enhance the buckle. Attach bands to hat then add buckle. You can wipe the back of the buckle with a damp paper towel to help fasten it.

How to make witch cupcakes 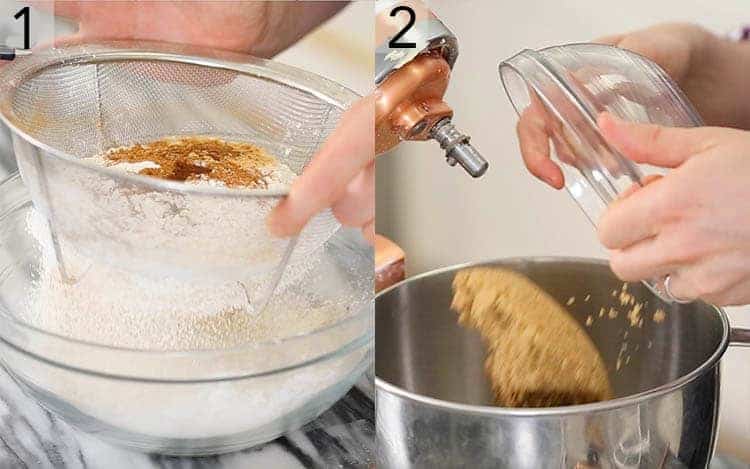 1. For the cupcakes; preheat the oven to 350F and add the cupcake papers to a cupcake pan. Mix the buttermilk, vanilla, orange blossom and sour cream in a glass and set it aside. Now sift the dry ingredients (except the sugar) together and give them a good whisk.

2. Cream the butter and sugar together in a stand mixer with a paddle attachment for approximately 4 minutes on medium. Add the eggs one at a time to make sure each one is incorporated well before adding the next. Add the flour mixture in three batches alternating with the milk mixture. Make sure you start and end with the flour mixture. Be careful not to over mix, just beat until combined.

3. Mix in the pumpkin puree and scrape down the sides of the bowl to make sure the pumpkin is well incorporated.

4. Transfer the batter into the cupcake papers. I use an ice cream scoop for uniform amounts and neatness but you can also spoon the batter in.Bake at 350 degrees for about 18-20 minutes or until the center is set and let cool. 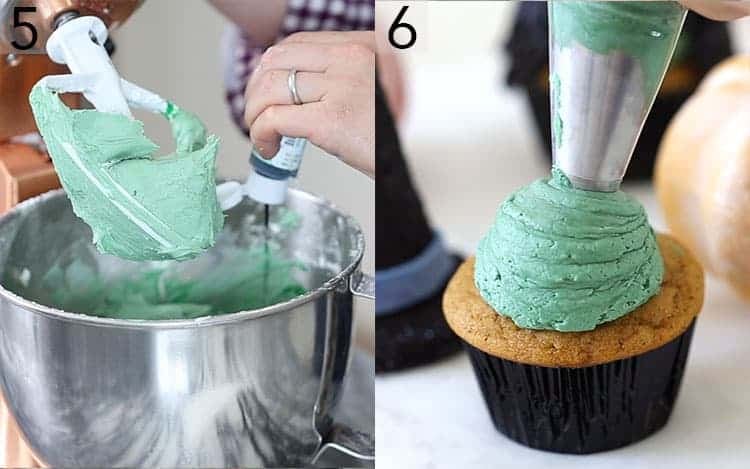 5. To make your buttercream, put the butter in the standing mixer with a paddle attachment and give it a little mix. Sift in your confectioners sugar in several batches, mix on low then add your vanilla. Reserve half of the buttercream to make one batch green and the other black.

6. Add some of the green buttercream into a piping bag fitted with an 808, or large round tip to pipe the face. A big crinkly mound will do just fine, witches don’t have smooth perfect faces! 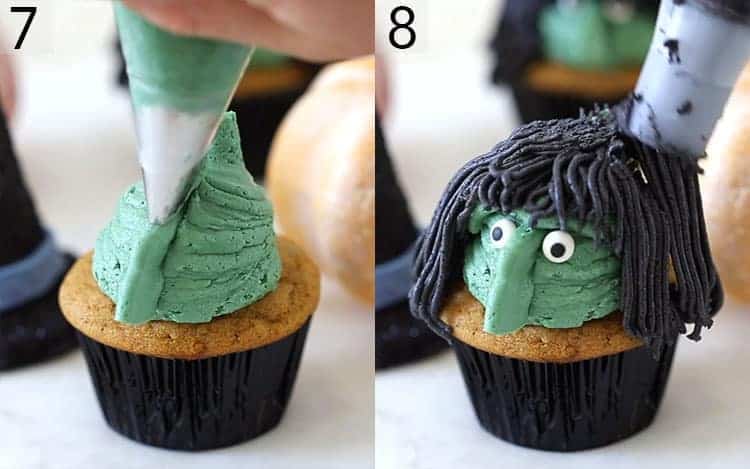 7. Use a large petal (125) tip turned around so the wide end faces outward to pipe the nose. Now pipe the brow and pop the candy eyes on. You can use mini chocolate chips with the flat side facing outward if you don’t have candy eyes.

8. Use a large grass tip to pipe the hair. Carefully place the hat on top, and you’re done!

If you’ve tried these witchy cupcakes then don’t forget to rate the recipe and let me know how you got on in the comments below, I love hearing from you! 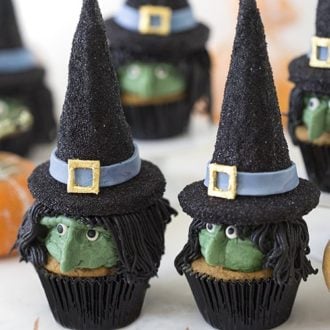