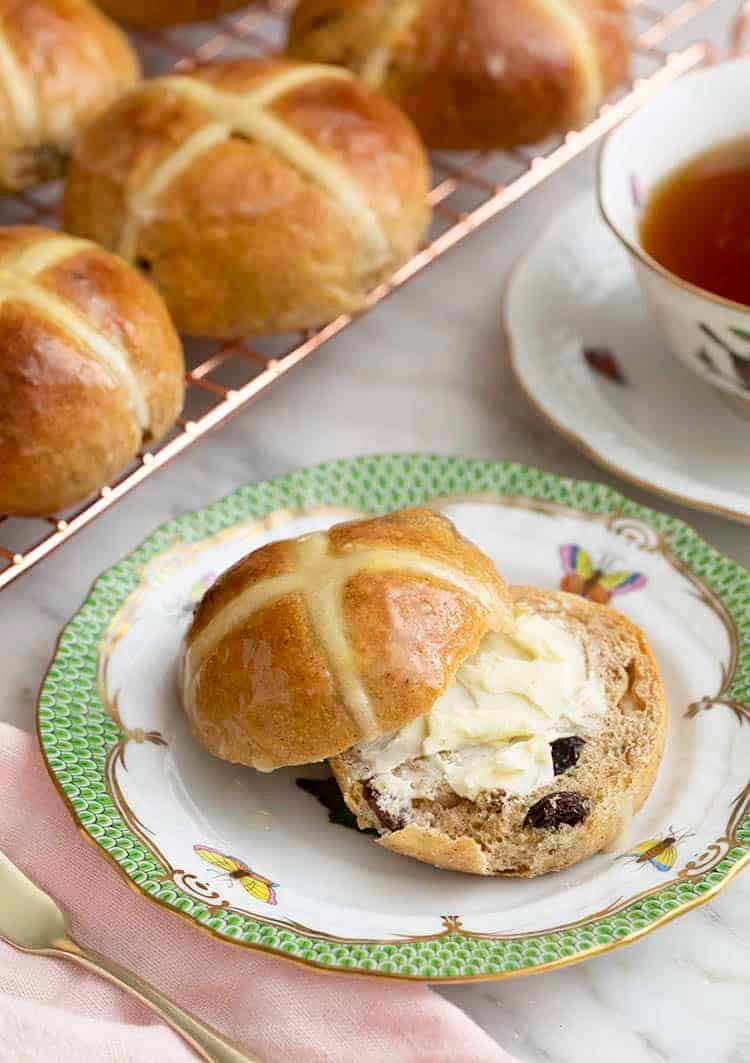 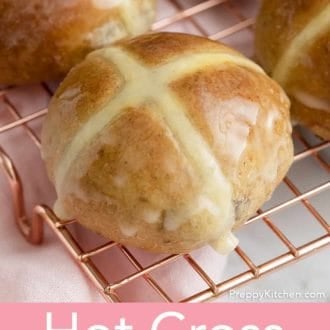 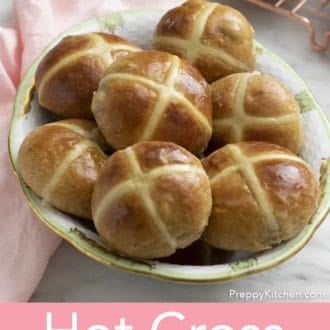 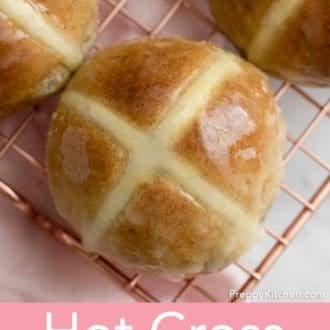 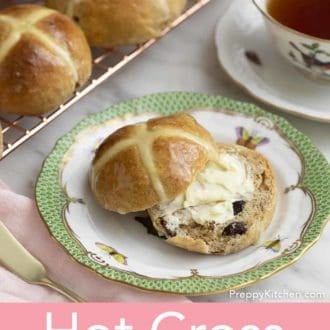 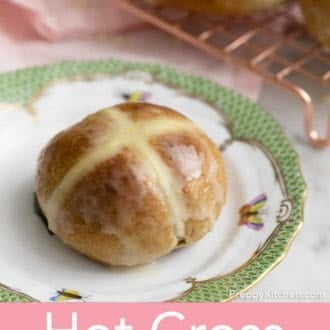 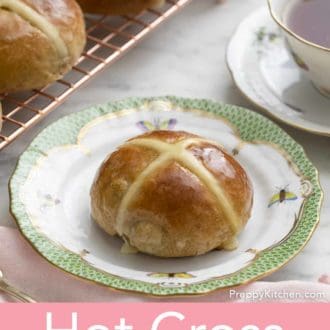 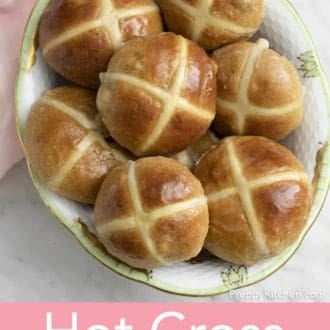 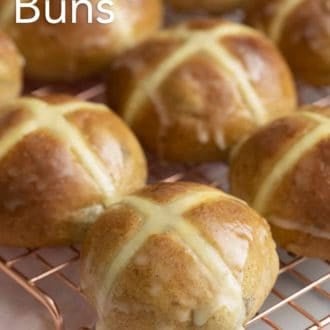 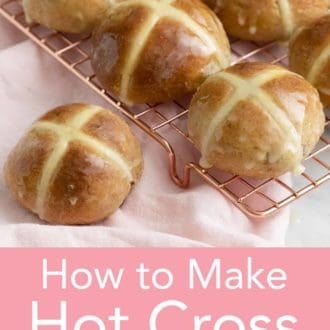 Hot cross buns warm out of the oven are truly a pleasure not to be missed. Sweet, spiced and filled with dried fruit; you’ll be craving these after trying this homemade version of the traditional Easter recipe.

I enriched my dough with butter, sour cream and milk so it’s rich, soft, and totally delicious. Any baked good that has a song about it is worth investigating! 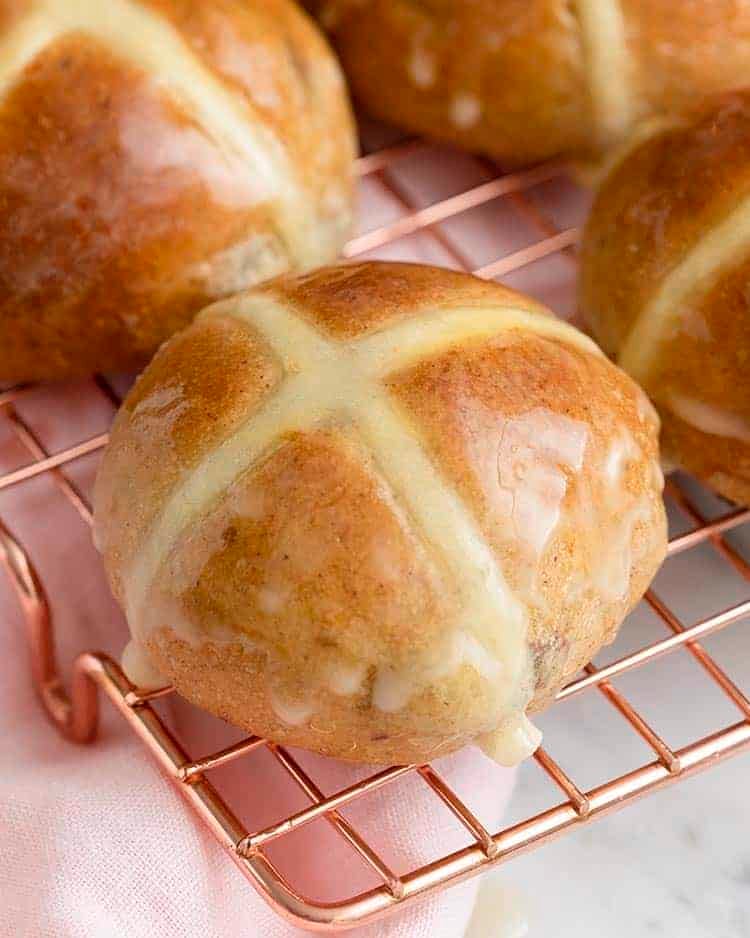 What is the significance of hot cross buns?

These are eaten at the end of lent. The cross symbolized the crucifixion while the spices signify the spices used to embalm Jesus.

What are hot cross buns?

Why do you eat hot cross buns on Good Friday?

These buns are made with dairy products, which are forbidden during Lent so you’re not supposed to eat them until Lent is over if you’re practicing that faith.

Which country has the tradition of eating hot cross buns at Easter?

These are thought of as an English tradition popularized in Elizabethan England which spread to many colonies like Australia, New Zealand, and America. These buns have been made since the 6th century AD, with Greek examples being known of among other places.

What can you top a hot cross bun with?

You can either pipe a cross with a paste or flour and water just before baking OR Pipe a cross with icing after the buns have cooled. I opted for the more traditional flour pate but the icing cross is JUST as easy!

Additionally you can brush the buns with an apricot glaze for extra shine and a dash or sweetness if desired.

Can you make this without a stand mixer?

Sure! Use an electric hand mixer with dough attachments or you can even do this by hand.

How to Make Hot Cross Buns 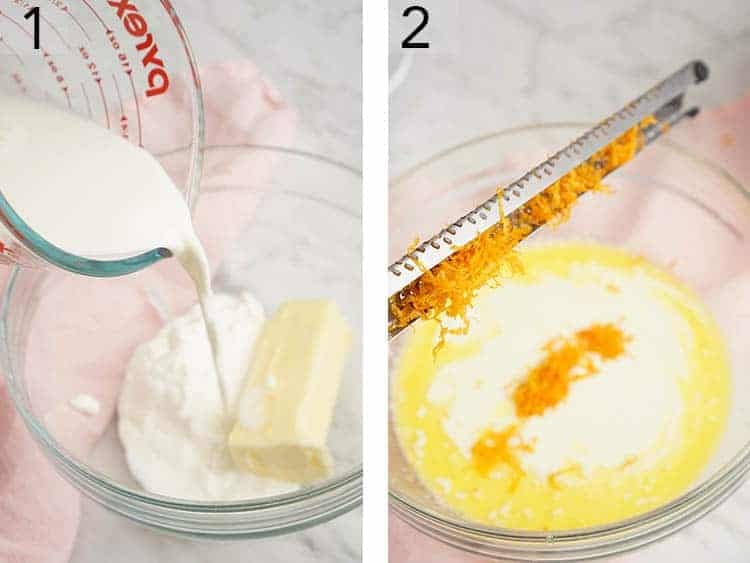 1. Add the butter, sour cream, and milk you a bowl then microwave In 3 30 second bursts mixing in between. The liquid mixture should get be 110F when you add it to the dry mixture in step 5 so it can be a bit warmer than that as it will cool fairly quickly.

2. Zest an orange into the bowl and whisk in then set aside. 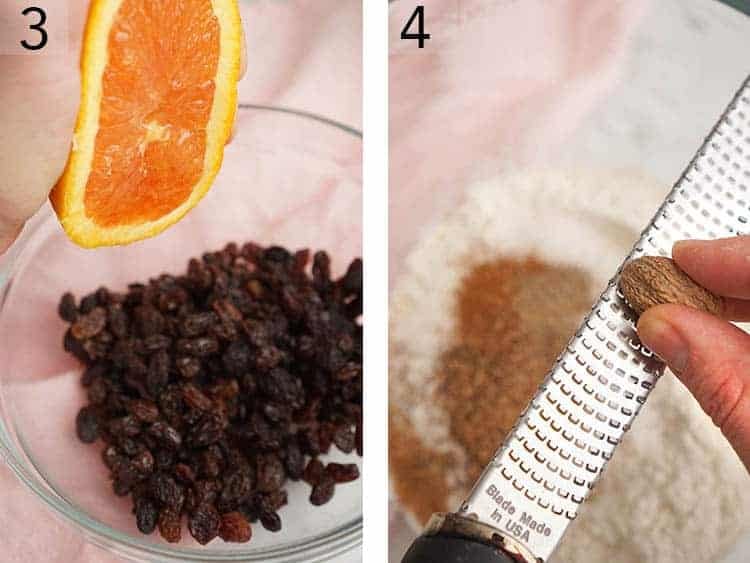 3. Dried fruit is ALWAYS better when you soak it; you can do this with the juice of half and orange or 1/4 cup dark rum. Heat for about 45 seconds in the microwave then set aside.

4. Add the flour, salt, sugars, yeast and spices to the bowl of your stand mixer. I always grate nutmeg but you can use the powdered variety instead. Whisk together and place on your stand mixer. 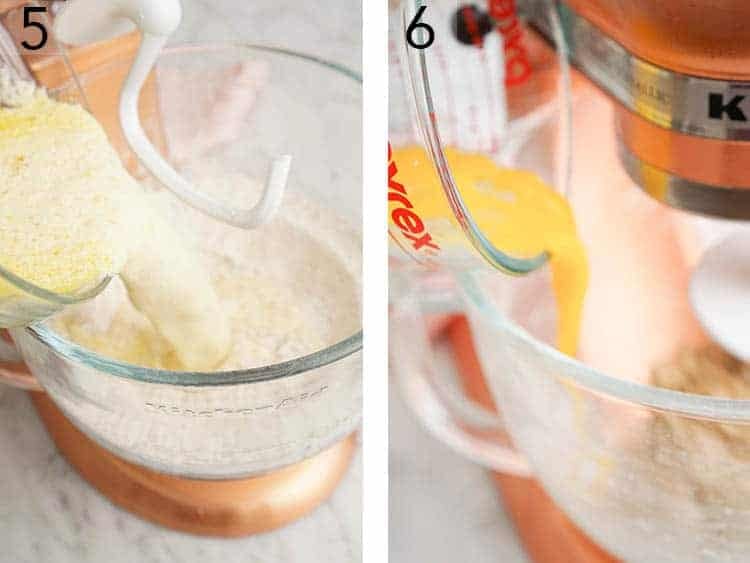 5. Attach a dough hook to your stand mixer then pour the wet mixture into the dry and mix on low.

6. While mixing pour in the beaten egg and increase speed to medium-low. 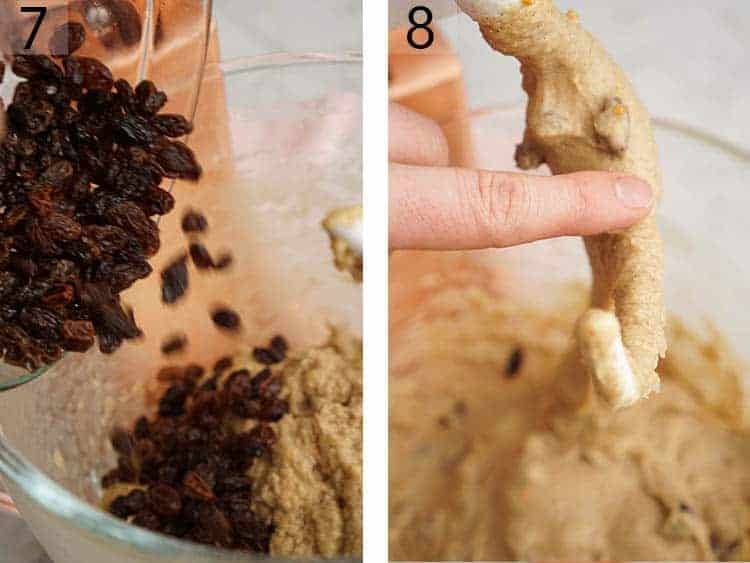 7. Once the dough starts coming together drain the raisins, or dried fruit, then sprinkle into the dough and mix on medium-low.

8. Continue mixing until the dough is tacky but does not stick to your fingers. 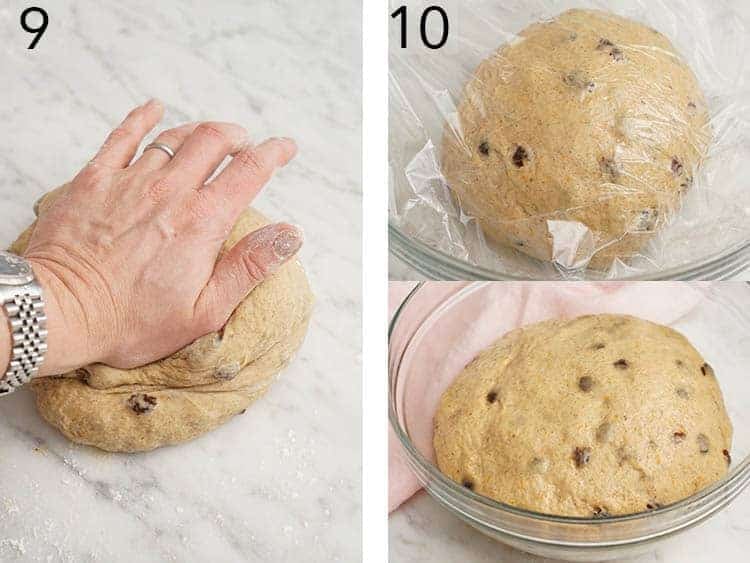 9. Knead the bread for about 5 minutes on a floured surface. When done the dough will spring back when pressed and have a smooth surface.

10. Place in an oiled bowl and cover with plastic then place in a warm spot to rise. I like to heat my oven to 120F then turn off and let the dough rise there. Your dough will double in size when it’s ready to knead. I will caution that this is a quite enriched dough so it can take up to two hours to rise but it’s TOTALLY worth it!! 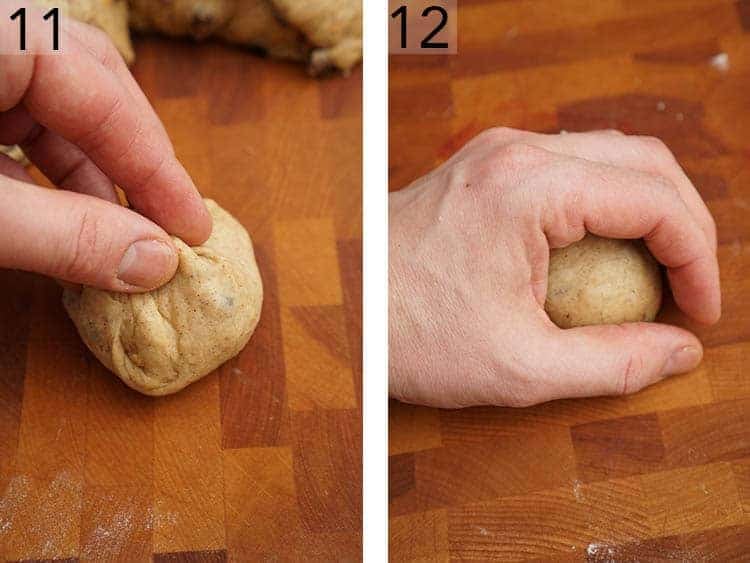 11. To make the rolls you’ll portion out pieces of dough a bit larger than a golf ball, 70g if you’re weighing them. Pinch the corners together so one side is smooth and rounded then turn upside down so the smooth side is facing up.

12. Cup the ball with your hands and move in a tight circular motion. This will pull the edge down and in creating a nice roll. 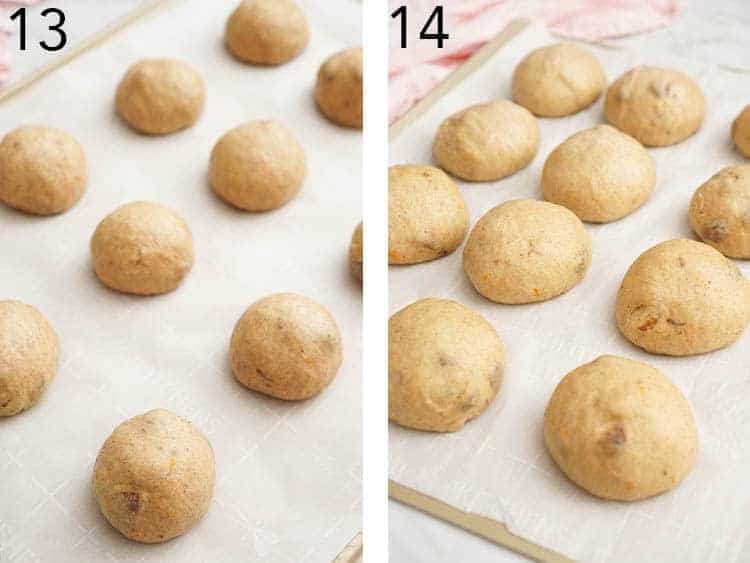 13. You have two choices for the bake. Space the rolls out almost 2 inches apart on a parchment-lined baking sheet OR you can bake in a baking dish and space them a bit closer together. If you got the baking dish route then you’ll get slightly taller rolls that are stuck together meaning they’ll have soft sides like a pull-apart roll.

14. Cover the rolls with plastic, foil, or a slightly damp cloth and place in a warm area for an hour or so until they puff up and expand. I like to set my oven to 120 then turn it off and let them hang out there.

After the rolls have risen it’s time to set your oven to 375F and make the egg wash. Mix the cream and egg in a bowl then gently brush each roll. 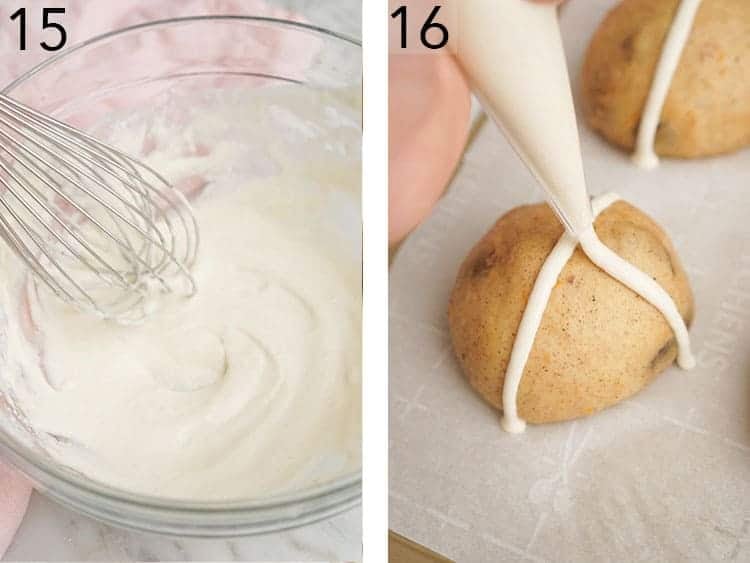 15. Add the water to a bowl then whisk in the flour. You’re looking to make as smooth pipe-able paste so add more flour or water as needed to achieve the correct consistency.

16. Transfer the flour paste to a piping bag with the tip snipped off or fitted with a smaller round tip. Pipe Crosses onto each roll; it’s easiest to do this if you pipe a stripe down the middle of each roll then turn the pan and pipe a perpendicular line. Go Slow so the paste hugs the roll.

Bake at 375F for about 25 minutes or until golden brown. Cover loosely with foil if the tops are getting too brown at the 15-20 minute mark. 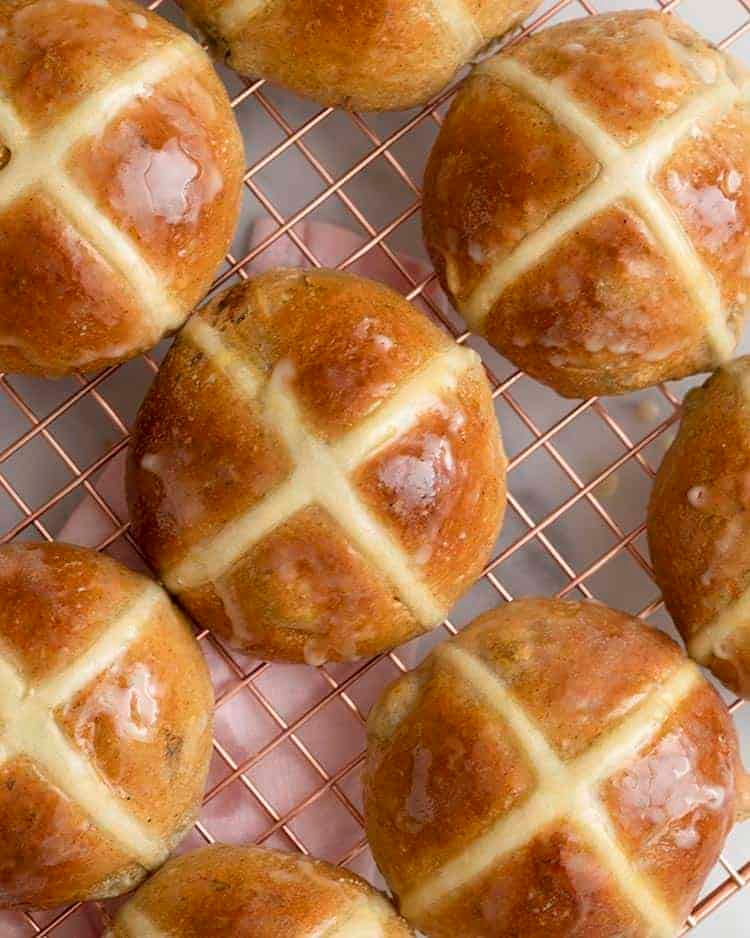 If you’ve tried this Traditional Hot Cross Buns recipe then don’t forget to leave a rating and let me know how you got on in the comments below, I love hearing from you! 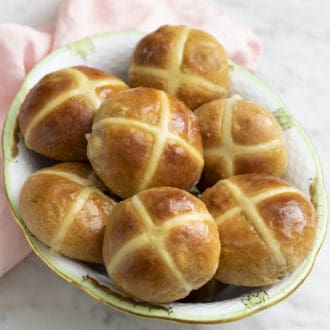 For the Egg Wash:

For the Flour Paste: